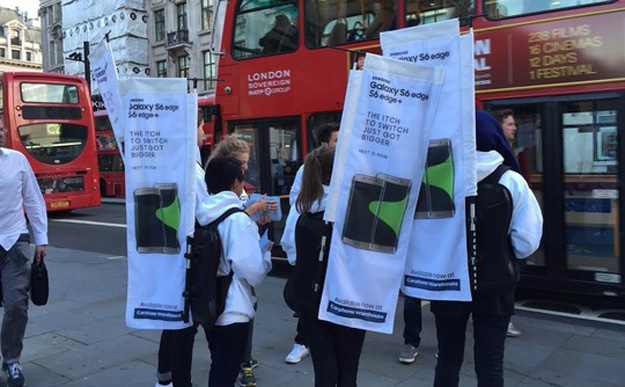 Samsung’s multi-billion dollar marketing budget was the key factor in the company’s meteoric rise to the top of the smartphone market. Samsung said it would make people love its phones as much as they loved iPhones, and its marketing team delivered. Bashing Apple’s customers and their precious iPhones was a key element of Samsung’s marketing strategy, and it worked… in 2011. Fast-forward to today, and Samsung’s handset profits have declined for the past seven consecutive quarters while Apple continues to set new iPhone sales records each quarter.

Friday is iPhone 6s Day, as we all know. People around the world lined up to be among the first to get their hands on Apple’s brand new iPhone 6s, and Samsung apparently saw this as the perfect opportunity to put on its troll hat.

Samsung hired a team to head out to the Apple Store on Regent Street in London last night to hand out pillows and blankets to people waiting in line. Isn’t that sweet?

But here’s where things get trollrific.

These bright blue blankets, water bottles and pillows had the hashtag #NextIsNew printed on them, and the team Samsung hired to hand them out did not identify themselves as being in Samsung’s employ. Better yet, the bright blue color of Samsung’s gifts matches Apple Store employees’ shirts exactly.

As it turns out, #NextIsNew is a Samsung hashtag, and the company was trying to make Apple fans look stupid by advertising a Samsung marketing scheme while waiting in line for an iPhone 6s.

“They were given to us by Apple,” one Apple fan in line outside the Regent Street store told International Business Times. His friend had looked up the hashtag though, and quickly corrected him: “No man, it was Samsung, I did a little research.”

More Samsung marketers returned to the store once the sun rose, and this time they weren’t quite as sly, as The Inquirer noted. Donning Samsung apparel, they walked around holding big signs that pictured the Galaxy S6 edge+ with the line, “the itch to switch just got bigger.”