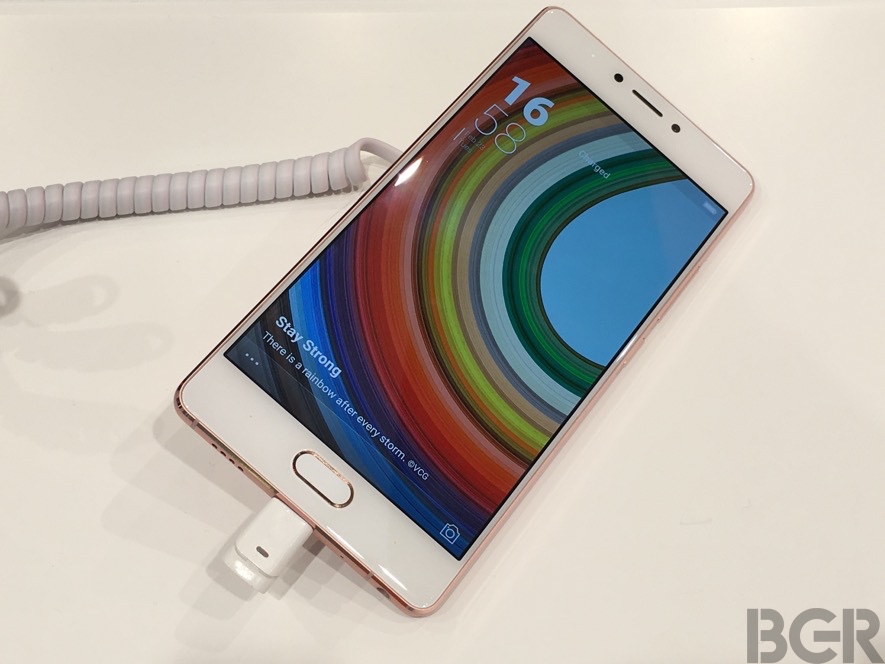 Apple’s 3D Touch is a pretty cool trick that lets me interact with my phone differently than any other phone I’ve used, although it’s relegated to performing shortcut-like features for the time being.

At MWC 2016, I stumbled upon a pink phone that’s ultra slim and features a screen that has sensors inside that let it interpret touches differently depending on pressure. And the company that makes it also calls it 3D Touch.

Meet the Gionee S8, an iPhone clone that also happens to be the first Android phone to incorporate 3D Touch.

The Gionee S8 will hit stores two months from now, and will cost just under €450 in those markets where it’ll be available. The price suggests the phone will have mid-ranged hardware, but that’s not quite so. We’re looking at a 5.5-inch Full HD AMOLED display, octa-core Mediatek MT6755 processor, 4GB of RAM, 64GB of storage, microSD support, 16-megapixel camera with f/1.8 aperture and fast auto-focus, 8-megapixel front camera, LTE Cat. 6 support, dual-SIM support, and a 3,000 mAh battery.

The phone runs Android 6.0 Marshmallow with Gionee’s OS on top, has a fingerprint scanner and a USB Type-C port on the bottom.

In other words, this is a great phone, considering the hardware and design combo – and it’s also only 7 millimeters thin.

The only problem with it is that it tries too hard to copy the iPhone from its color to its overall appearance to the fact that it has 3D Touch that works exactly like Apple’s.

It’s got Peek and Pop preview, it’s got Quick Actions shortcuts just like the iPhone, and it also supports a multitasking-like feature. But unlike 3D Touch on the iPhone’s left edge, which triggers multitasking, applying the same kind of pressure on the same region of the S8’s screen just brings up a list of favorite “Edge” apps.

Don’t get me wrong, I think there’s value in 3D Touch. I use it all the time on the iPhone, and I think Google might be bringing it over in Android N. But Android, as it is now, doesn’t have native 3D Touch support. That means developers might not be that eager to invent 3D Touch features for any phones that would have a pressure-sensitive screen.

Samsung was rumored to include 3D Touch functionality in its Galaxy S7, but that didn’t happen. Did Samsung realize there’s no point inventing this feature until Google’s Android actually supports it? We’ll find out for sure at Google I/O later this year.