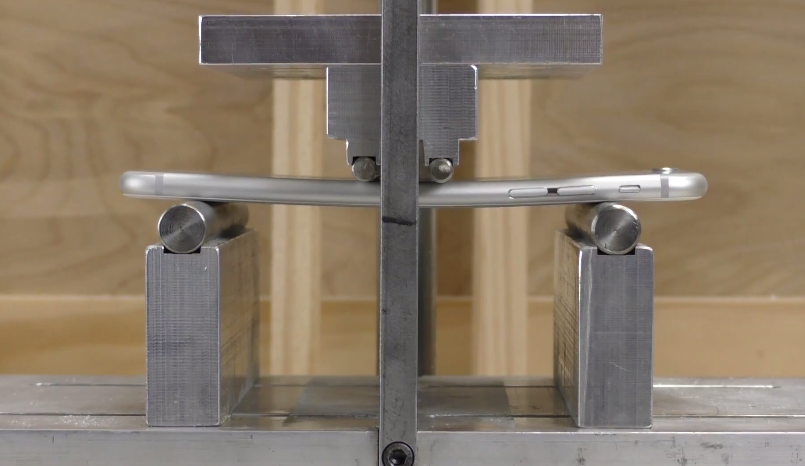 So far we’ve seen a bunch of videos of people bending the iPhone 6 Plus with their bare hands, but what happens when someone actually tries to give the device a “bend test” that’s somewhat scientific? The team at uBreakiFixCo decided to clamp the iPhone 6 Plus, the Galaxy Note 3 and the iPhone 5 into a 4 point bend fixture and then apply up to 100 pounds of force to each of the phones. The results, interestingly, were much the same as what Unbox Therapy found in its original video.

RELATED: Video shows just how easy it is to bend the iPhone 6 Plus

Long story short: The Galaxy Note 3 will bend more if you apply pressure to it but it will also snap back to its original form once you ease off on it thanks to its plastic casing. The iPhone 6 Plus won’t bend as much, however when you do bend it, it won’t completely revert to shape as the Note 3 will since its aluminum casing is much less flexible than plastic. The iPhone 5, on the other hand, bent less than either device and wasn’t noticeably misshapen after pressure was released.

So it seems that the reasons the iPhone 6 Plus is more likely to bend than other phones are twofold: First, it’s larger than any other phone Apple has ever released and second, it’s made of aluminum and much less likely to bounce back into shape as larger plastic phones such as the Note 3 or the LG G3 do.

Whether this means you shouldn’t buy the iPhone 6 Plus is a different matter entirely — we still don’t know exactly how much pressure most people exert on the device when they sit down with it in their front pockets.

Watch the whole video posted below and judge for yourself whether you think this sort of thing is a deal breaker (deal bender?) or not.