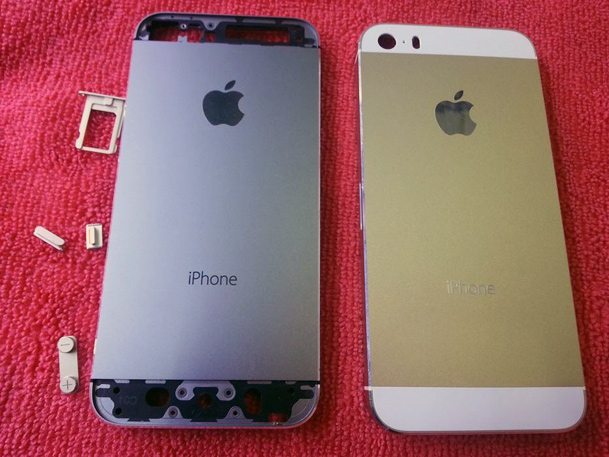 Apple’s next-generation iPhone 5S and brand new mid-range iPhone 5C have been leaking in bits and pieces for months now, but a new report provides a massive photo gallery full of casings, display assemblies and more than a dozen other parts. Sonny Dickson on Friday published a huge photo gallery containing images of the iPhone 5S in black, white and even “champagne” gold, alongside Apple’s upcoming iPhone 5C shell in blue. The gallery, which contains nearly 70 photos, includes a comparison between the two devices and also reaffirms various details from several earlier reports.

The first set of images in Dickson’s gallery contains several high-quality images that seemingly show the iPhone 5S’s new display assembly, while the second set shows a comparison between a white iPhone 5S casing and a blue iPhone 5C shell. The black iPhone 5S and champagne gold version also make appearances in this photo set, as does the oblong cut-out that will contain Apple’s new dual-LED flash next to the camera lens.

Several photos of various iPhone 5S and iPhone 5C parts follow, some of which were already revealed in an exclusive BGR report back in May, including various internal components and a champagne-colored SIM tray. There are also photos of iPhone 5C housings and buttons in a variety of colors.

Apple’s next-generation iPhone 5S is expected to feature an upgraded camera, a fingerprint scanner and a new gold color option. The iPhone 5C will likely debut alongside the iPhone 5S with more modest specs and a plastic case available in five colors.

Both phones are expected to be announced on September 10th ahead of a release in the U.S. and other launch markets on September 20th.

Several photos from Dickson’s gallery follow and the rest can be seen on his website, which is linked below in our source section.