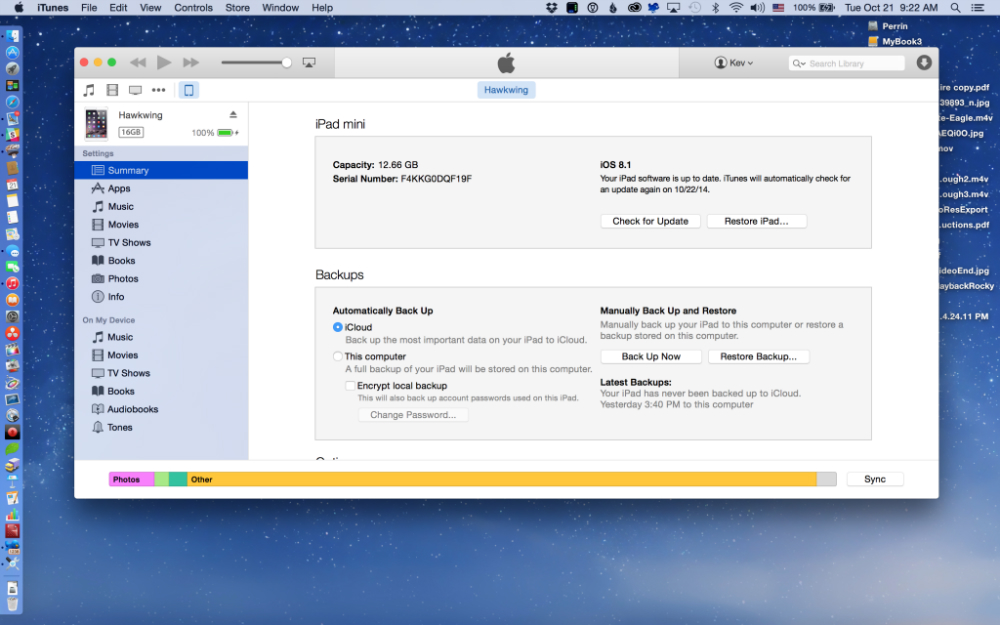 One of the most important reasons for some iOS 7 users not to upgrade to iOS 8 is storage space, as both the iOS 8 or the iOS 8.1 updates require plenty of storage for over-the-air upgrades. Apple enthusiast John Gruber found one potential explanation for this particular iOS problem coming from Kevin Hamm, who has figured out how the device’s storage can been taken over by “Other” files.

In addition to seeing specifics about an iPhone’s or iPad’s contents when connecting it to iTunes — such as music, photos, movies and apps — you might also notice a yellow “Other” category in the bottom storage bar (image above). However, the same “Other” category doesn’t appear on the iPad’s Storage section (under Settings > General > Usage), and can’t be manually dealt with.

Hamm found out that “Other” category significantly increases in size when streaming content from iTunes, and it even managed to fill the entire memory of his iPad (which only had basic apps and some photos) with movie downloads that would not automatically disappear after the movies have been watched.

Furthermore, Hamm noticed that the downloaded movies did not show up under the Storage section on the iPad, and there was no way to remove them, other than by trying to install an app.

The same thing might happen to many other iOS device users who are consuming plenty of content from the iTunes store, and whose storage might be filled up with “Other” files that can’t be manually removed. Critically, without connecting the device to iTunes, a regular user might not even know it has an “Other” problem.

“Now, full disclosure, I knew this was the problem with what creates the mysterious other in the OS, and is causing so many issues,” Hamm said. “Now, I used to have a developer account I could access to see the names of the files that made up any particular category, and that’s how I knew what was causing this issue. The only new thing was that installing an app apparently deleted some of the other, but not all of it. And it’s very simple to fill it back up. It’s a bug, and easily reproducible, so I’m hoping that Apple fix it.”