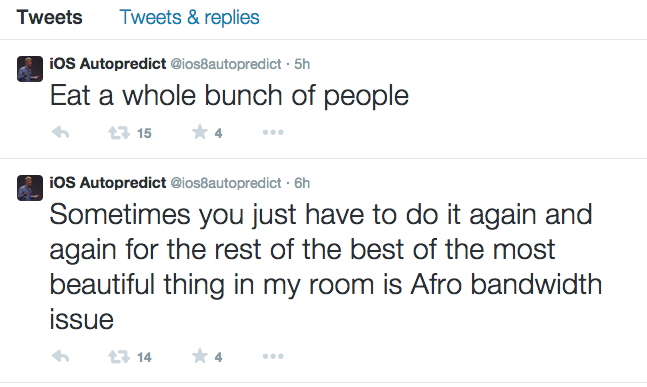 It hasn’t taken long for iPhone users to start having fun with some of iOS 8’s new features. One iPhone user decided to experiment with composing entire tweets based on iOS 8’s autopredict feature that gives you suggestions for what words you’re likely to use next in a sentence. The user started out with just one word and picked autopredict suggestions about where to go from there and the results were about as ridiculous as you’d expect.

HOW TO GET STARTED IN iOS 8: 5 fantastic apps that will help you get the most out of iOS 8

So for example, starting out with the word “eat” resulted in the sentence, “Eat a whole bunch of people.” Starting out with a simple “I’m,” meanwhile, spawned a sentence that read “I’m not sure what the best way for me and my iPad and trampoline too long for side to be side to side with your family your life and death.”

Not all of the tweets were incoherent nonsense, however. In fact, one of them was downright sweet — starting off with a “you” produced a sentence that read, “You are the best thing about being in love again.”

Be sure to check out all of the iOS 8 autopredict tweets by clicking the source link below.