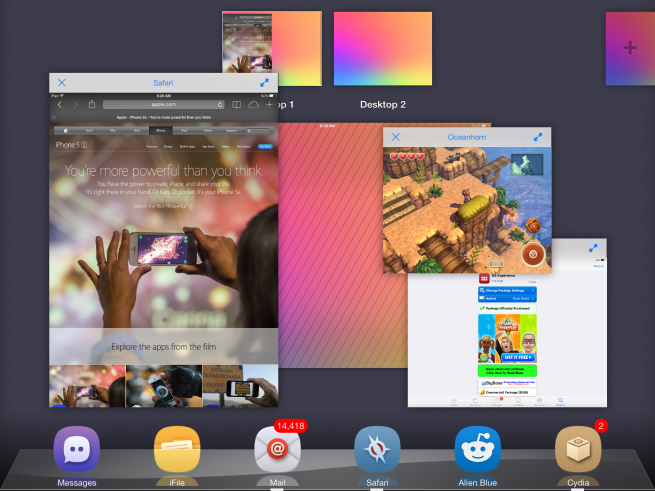 Even though Apple thinks unifying the iOS and OS X universes — in a similar manner to Microsoft’s “no-compromise” Windows approach — would be a waste of energy, the two operating systems have various things in common, allowing users to somewhat merge their iPhone/iPad and Mac universes. However, some developers have actually worked on making the two operating systems more similar, iTwe4kz revealed on YouTube.

A jailbreak app called “OS Experience” relies on gestures to let iPad users move through desktops and apps, and to bring forward certain app elements. Interestingly, the app lets users to run native apps in windows mode, just like they would on a Mac, making multitasking a bit different.

Users should be warned that once OS Experience is installed, they will lose access to Control Center and to the default app switcher in iOS 7, at least for the time being. Furthermore, it’s not clear how this tweak will affect battery life on the iPad, considering that it may require more resources than the default iOS 7.

OS Experience has been in development for quite a while and is available for download via Cydia on jailbroken devices that run iOS 7 or later for $9.99. However, the problem with the application is that the majority of iOS users won’t actually be able to use it, since iOS 7.1 can’t be jailbroken just yet — at least not on most devices.

Apple has patched the iOS 7 vulnerabilities that allowed users to develop an untethered jailbreak in its iOS 7.1 release. Since then, 88% of the current iOS user base has already upgraded to iOS 7.1, which means they won’t be able to try OS Experience.

For what it’s worth, Apple is said to be bringing some of the iOS design concepts to OS X in the future, and adding other OS X apps to iOS 8 including Preview or TextEdit.

A video showing how smooth OS Experience is on an iPad follows below.