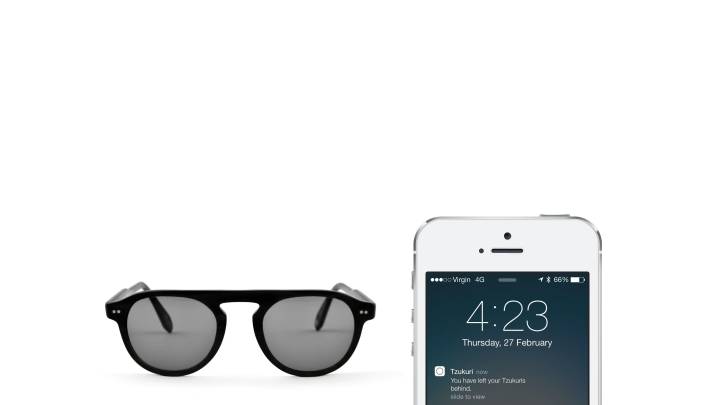 With iOS 7, Apple introduced iBeacons, a protocol that uses Bluetooth Low Energy (BLE) to determine your location down to within a couple feet. We’ve already seen some innovative uses of iBeacons — for example, Major League Baseball uses it within its stadiums, while Apple uses iBeacons in its retail stores to alert customers about discounts on nearby items.

But iBeacons are just getting started, and Gizmodo alerts us to one of the more interesting implementations of iBeacons from a company called Tzukuri. Tzukuri put a tiny (3 millimeter) iBeacon chip in its sunglasses to alert you when you’ve accidentally left your sunglasses behind. When your sunglasses are more than 16 feet away from your phone, you’ll get an alert, and then again at 32 feet and 50 feet. If you venture further than that, the Tzukuri app will keep track of the last location it had for your sunglasses.

The iBeacon chip is incredibly small and is not noticeable in the pictures on Tzukuri’s website. Tzukuri also added a small solar cell, so it should never run out of battery. If it does Tzukuri says you only need to stick the sunglasses in the sun for an hour to recharge. The alerts work both ways, too, as your phone will start ringing loudly if you are wearing the sunglasses and leave without it.

The sunglasses are going to cost a bit more than a cheap pair from the supermarket, however, and will be priced at $349 when they ship this coming holiday season. However, there’s a reason for this. Each pair is handcrafted and will come in one of six designs, each based off the style of glasses worn by six iconic figures: fictional lawyer Atticus Finch, President John F. Kennedy, designer Tom Ford, Beatles legend John Lennon, actress Grace Kelly, and writer Truman Capote.

The sunglasses also are only available for iPhones, and the Tzukuri doesn’t look like it will be supporting Android any time soon, as its FAQ says it will not support Android until “BLE becomes more standardized across Android handsets.”