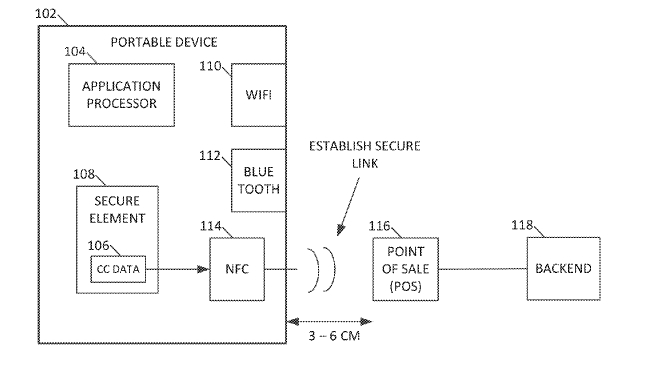 A new Apple patent application reveals that the company is interested in secure wireless “iWallet” payments based on various wireless technologies including Bluetooth Low Energy (LE), Wi-Fi and near field communication (NFC), Patently Apple reports. While the iBeacon Bluetooth LE-based technology isn’t specifically mentioned, it makes sense to assume that the company would employ iBeacons for a wireless payment solution in stores including its own, in the event that the wireless payment methods described in this patent are actually used in the future. iBeacons have already been deployed in Apple retail stores, with the technology seeing popularity with other companies as well – Major League Baseball will use iBeacons in stadiums, while a recent scavenger hunt was organized at CES 2014 based on iBeacons.

As for iWallet, Apple doesn’t use that exact name for a payment application for mobile devices at this time, although the company has been rumored to be working on such technology and has other patents that describe wireless payment methods.

The new patent application, filed in September and recently published by the U.S. Trademark and Patents Office (USPTO) – titled “Method to send payment data through various air interfaces without compromising user data” – describes means of securely paying for products using a wireless connection between mobile devices and a point-of-sale device.

Even though Apple’s proposed payment solution includes NFC – a wireless connection standard that’s not supported by its mobile devices, but is employed by many Android devices – the company says that NFC technology is “less desirable for longer transactions,” adding that Wi-Fi or Bluetooth connections can better maintain a link than NFC, without the user having to keep the mobile device near a POS, which is what is required for NFC-based payments.

When it comes to payments security, the patent applications describes a two-link wireless connection between mobile devices and store, one needed to connect to a POS, and a second encrypted connection required to pass over payment details that are processed by a backend server. The mobile device and the server connection is secured by a “shared secret” between them. The shared secret would be “known to a secure element in the purchasing device,” where it would be included during manufacturing, and to the server where it would be secured behind a firewall.

Like many other tech companies, Apple patents a variety of ideas that may or may not be used in future devices. It’s not clear at this time whether this iBeacon/NFC/Wi-Fi iWallet payment method will be used in the future in Apple retail stores or any other places, or whether future iOS devices will soon get such payment features in the future.