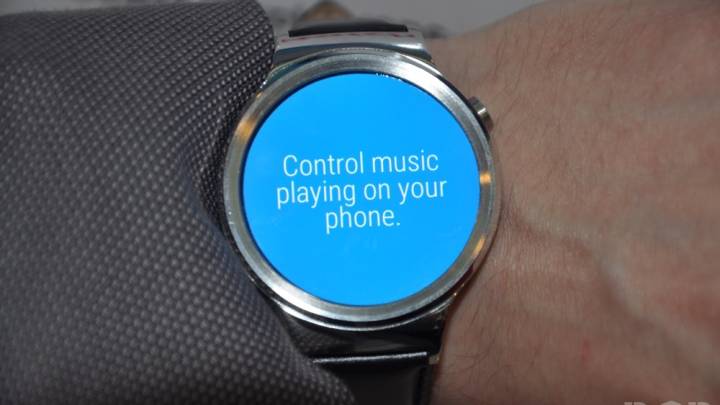 While the most interesting mobile toys introduced on Sunday came from two of the most important Android smartphone makers in the world, HTC and Samsung, other companies made several announcements as well. Among them, you could easily spot a new wearable device coming out of China — the Huawei Watch, which might just be the only Android smartwatch you should care about right now.

FROM EARLIER: A gorgeous Android Wear smartwatch is about to take on the Apple Watch

Getting to see the Huawei Watch is no easy task either, as you won’t find it in Huawei’s main booth here at the massive mobile show. Instead you have to go to a special exhibition room in a different hall — just look for a crowd of people trying to get in.

Just like with the LG Urbane Watch, it’s really just the design that attracts. After all, the gadget still runs Android Wear, which will get you the same old set of features once the gadget is paired with an Android handset. And for a watch, including a smart one, the look and feel are both very important.

The Huawei Watch is absolutely gorgeous, and if I liked the Watch Urbane a few minutes earlier, Huawei’s creation is what I’d choose over LG’s design in a heartbeat.

The screen seems brighter, and the gadget appears to somehow be even smaller, occupying less space on my wrist. Even though Huawei will offer a wide variety of straps to go along with the device, the company only had two models on display — hence the crowds gathering around them — with leather and metal straps, as seen below.

It’s unclear at this time when the device will be released and how much it’ll cost, but Huawei might have a winner on its hands, provided it manages to support it with a proper launch.

Specs-wise, the device is similar to the LG Urbane Watch, though it does pack some differentiating features including a bigger 1.4-inch AMOLED display with 10:000: 1 contrast ratio that’s protected by sapphire glass, a higher 400 x 400 resolution, and a heart rate sensor.

The device is built of more than 130 components, and it’s made using “high-quality and scratch resistant cold-forged stainless steel.”

Depending on your mobile platform preference, the other smartwatch to… watch… is Apple’s upcoming Apple Watch, which will launch in April. For Android device buyers looking for a smartwatch though, the Huawei Watch might be the only one worth considering right now, or perhaps the Pebble Time as well.

More images of the Huawei Watch are available below.