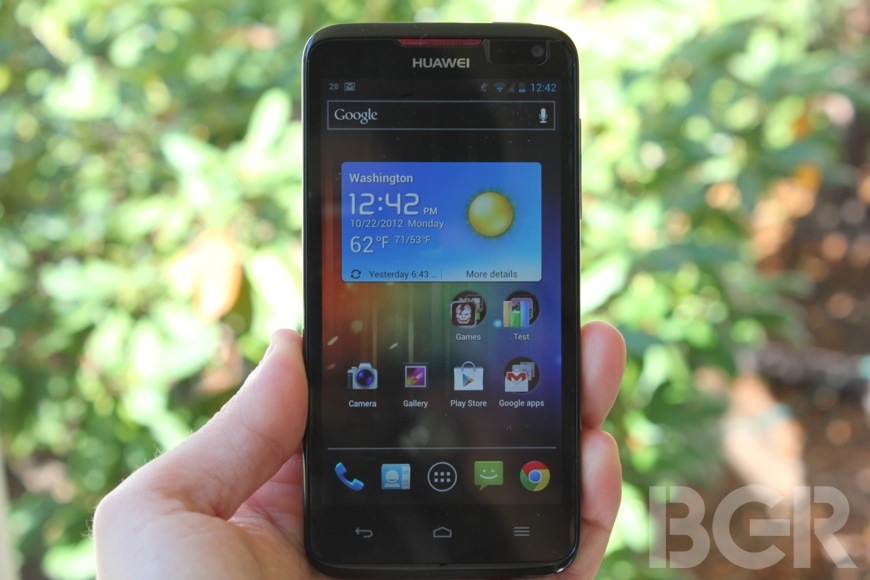 Following a special report on 60 Minutes, Huawei went from being a relatively unknown Chinese company to public enemy number one. It was alleged that the telecom equipment giant was in cahoots with the Chinese government and posed as a potential security risk to the United States. Shortly after the report was made public, however, a White House-ordered review found no evidence that the company was spying. Huawei has a large task at hand, along with attempting to fight Samsung (005930), Apple (AAPL) and others for smartphone market share: The company must now recover from a sea of bad press. After a short delay in production, Huawei is finally ready to unleash “the world’s fastest quad-core smartphone” to the world. Read on to see if the Ascend D Quad XL lives up to its name.

Huawei announced the Ascend D Quad XL this past February at Mobile World Congress in Barcelona. The smartphone is equipped with a 4.5-inch display with a 1280 x 720 pixel resolution and a pixel density of approximately 326 pixels-per-inch, matching Apple’s favorable Retina display. The IPS+ screen is truly a sight to be seen and in some cases beats its Android competition such as the HTC One X and Samsung Galaxy S III. The display is bright and vibrant, and perhaps the best news of all is that it doesn’t employ the controversial PenTile matrix that other manufacturers have turned to.

The handset is powered by Huawei’s in-house K3V2 quad-core processor clocked at a sufficient 1.5GHz and is nearly speedy enough to be called “the world’s fastest quad-core smartphone.” The device is fast and I mean really fast, however select benchmark results pegged the K3V2 CPU slightly slower than Qualcomm’s (QCOM) quad-core Snapdragon S4 Pro processor that is found in the LG Optimus G.

The device also includes 1GB of RAM, a microSD slot, MHL connectivity, DLNA support, a 1.3-megapixel front-facing camera, an 8-megapixel rear shooter and a 2,600 mAh battery, both of which we will discuss in further detail below.

It didn’t take long for me to appreciate the build quality of the Ascend D Quad XL, the smartphone is by no means thin but it feels great in hand. The handset measures in at 129 x 64 x 10.9 mm and weights a hefty 150 grams. The device features red accents and at a quick glance can be mistaken for an HTC (2498) smartphone. It doesn’t have a cheap feel, however, thanks in part to a textured back plate that sits in between the DROID RAZR’s Kevlar backing and the feel of a Nexus 7.

The microUSB port, which supports MHL, is located on the upper left hand side of the device, while an up and down volume rocker sits on the right. On the upper left is a 3.5mm headphone jack with the power button situated to its right.

Despite Google’s (GOOG) plea for manufacturers to incorporate on-screen software keys, Huawei has instead stuck with three capacitive buttons — back, home and settings. This may just be me nitpicking but I hate that Huawei decided to go with an unnecessary settings button rather than the traditional multitasking menu, which can instead be utilized through a long press on the home button.

I have nothing but praise for Huawei and its software team because they are doing something no other Android manufacturer is, and that is giving consumers a choice. Unless you are buying a Nexus-branded device, your smartphone or tablet likely has a clunky manufacturer skin layered over the Android operating system. I have always been critical of custom skins and nothing has changed. Huawei gives users a choice, however, between a nearly non-skinned version of Android, known as the 2D Home, and a heavily customized and clunky 3D interface. Android is all about choices and freedom, and that is exactly what Huawei has done with its software — it is time for other companies to take notice.

If you were to choose the 3D homescreen you would be welcomed with cheesy animations, unnecessary widgets and childish icons. It isn’t smooth by any means and I could only use for a few minutes before I began to lose my mind. The stock homescreen was relatively smooth and an enjoyable experience, on the other hand, although I did notice a few hiccups while launching certain applications and within the app drawer.

Like other manufacturers, the Chinese company bundles a variety of custom applications with the smartphone, although I see this as a non-issue. The programs can be disabled or uninstalled in the settings menu, even though most are there to assist users and protect their device, such as a Windows-esque Security Guard and a helpful Flashlight app.

I do have one complaint, though. The Ascend D Quad XL is only running Android 4.0.4, known as Ice Cream Sandwich. Smartphones should be released with the most recent operating system, especially with the launch of Android 4.2 on the horizon.

While I don’t usually dedicate an entire section for battery life, when a device is sporting a 2,600 mAh battery and at a time when consumers are becoming more concerned with the longevity of their devices, it seems more than appropriate. The Ascend D Quad XL’s unremovable battery was able to deliver enough juice for a full day’s use under normal circumstances — checking emails, updating status, sending text messages and making the occasional phone call.

When pushing the device to the limits with high-intensity games and frequent usage, the Ascend D Quad XL was still able to deliver impressive results of more than 10 hours of battery life. I am sure most people will agree that the extra thickness, 2mm to be exact, is more than welcomed to make room for a bigger battery.

There is something to be said about Android cameras: To put it lightly, a majority of them are complete and utter garbage. As others have suggested, it could have something to do with the software because even identical sensors produce worse images when taken with an Android device. The camera in the Ascend D Quad XL is no different from its Android competition, it gets the job done but it isn’t a high-end shooter and it won’t be winning any awards anytime soon. The 8-megapixel camera can take some good shots in even lighting with the proper settings, however I found it to fall short of both the iPhone 5 and iPhone 4S.

These days more and more people are leaving their traditional point-and-shoot cameras at home and instead are turning to their smartphones. Unfortunately for Huawei, the Ascend D Quad XL’s camera won’t be replacing any point-and-shoots in the near future.

As I mentioned in my review of the Ascend P1, the shutter also makes an obnoxious focusing sound that cannot be silenced, calling it annoying would be an understatement.

While the Ascend D Quad XL has its flaws, it is no doubt Huawei’s best smartphone to date. The device is quick and its brilliant display makes it more than capable of holding its own with the current Android players. It is unclear if the handset will ever receive an update to Jelly Bean or even a later version of Android in the future, however, and that is a reason for concern.

In order to build market share Huawei will need to price the Ascend D Quad XL accordingly and in no way should attempt to compete with the sea of devices in the $199 on-contract range. With that said, Huawei has a bright future ahead of it and with each smartphone it has made leaps of improvement. The Ascend D Quad XL, if priced accordingly, will satisfy your needs of a typical high-end smartphone.