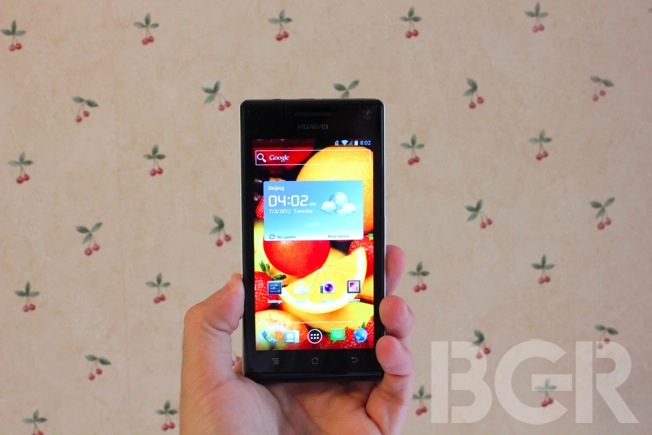 Huawei isn’t a well known brand when it comes to the U.S. smartphone market. The Chinese manufacturer is looking to change that, however, and plans to push forward with more advertising in the U.S. and a slew of new smartphones. The Ascend P1 was announced at this year’s Consumer Electronics show in January, and over the past few months it has been slowly rolling out in various markets. Huawei is betting big on its Android-powered smartphones, but in a world of Samsung Galaxy S IIIs and HTC One Xs, is the company’s latest effort enough to attract consumers and increase its share of the extremely competitive smartphone market? Read on to find out.

The Ascend P1 is just 7.7 millimeters thick, making it one of the thinnest smartphones on the market, and it weighs a mere 110 grams. The handset doesn’t look bad, although I would have preferred rounded corners. And even though the amount of plastic the P1 employs may resemble a Samsung device, the phone feels great in your hand and not at all flimsy.

On the bottom resides three capacitive buttons; menu, home and back. For some reason, Huawei thought it was a good idea to keep the menu button rather than a recent applications button, as is the case with other Ice Cream Sandwich phones. To view recent apps, you must instead hold the home button.

The left side of the phone is home to the volume up and volume down buttons while the right side holds a power button and a micro SD slot. I found the buttons rather annoying and unresponsive, requiring a fair amount of pressure to get presses to register.

Huawei also decided to follow in the footsteps of other manufacturers and included a non-removable 1,670 mAh battery, which forces the SIM card slot to be located on the top of the device next to the microUSB port and 3.5-millimeter headphone jack.

Despite the non-removable battery, the smartphone easily lasted a day with moderate use.

Huawei’s smartphone features a 4.3-inch Super AMOLED display with qHD resolution and a pixel density of 256 pixels-per-inch. The screen is bright and sharp, although its PenTile matrix clearly stands out when compared to other handsets. The low resolution will also disappoint some potential buyers considering most high-end phones now feature 720p HD displays.

The smartphone features an 8-megapixel rear camera with a dual-LED flash that is capable of capturing 1080p video. The camera application supports HDR, Panorama, Low light, Smile Shot and Group camera modes, and comes preloaded with numerous “hipster” filters that allow users to customize their photos.

Images taken with the P1 are at best marginally above average for an Android smartphone. The camera cannot compete with HTC’s One X or Samsung’s Galaxy S III, although I found it to capture higher quality photos than the Galaxy Nexus and DROID RAZR MAXX. When compared with Apple’s iPhone 4S, which arguably contains one of the best smartphone cameras, the P1’s images, while sharp, seemed over-saturated and were unable to capture colors accurately.

As you can see from the example above, images taken with Hauwei’s smartphone have somewhat of a blue tint. The camera cannot compete with high-end devices, although as a mid-range model it could lead the pack.

One major annoyance I found while taking photos with the device was the obnoxiously loud sound the camera makes as it attempts to focus, which is impossible to silence.

The Ascend P1 shines when it comes to software and I praise Huawei on its implementation of the Android operating system. It is no secret that I dread manufacturer skins, and Huawei seems to be the only manufacturer that gets it. The P1 ships with a near stock version of Android 4.0.3 Ice Cream Sandwich. Huawei has done something no other smartphone vendor has done, however, and given users the option to switch to a skinned user interface.

Tapping the menu button reveals a “3D Home” option, which quickly skins the device with Huawei’s custom interface. The UI is nothing special and features the usual 3D animations, but the fact that Huawei gives users the option to easily switch back to stock Android is fantastic.

The Chinese manufacturer added a few enhancements to Android’s stock experience, such as a beautiful weather widget and quick shortcuts to Wi-Fi, Bluetooth, GPS, Data Toggle and Auto-Rotation in the phone’s notification bar. All in all, the added features are welcomed.

The Huawei Ascend P1 is an interesting smartphone. By no means is it a high-end device, and I don’t think Huawei intends it to be, but for the right price the handset could be a winner.

The P1’s quick and responsive hardware, along with a near stock Android experience and above average camera performance, sets the device above some of its competition. While it is hard to recommend to power users, especially with newer and more powerful devices always on the horizon, the handset could be appealing to more frugal and less tech-savvy consumers.

If marketed well, priced competitively and aimed at the right audience, Huawei could finally make a splash in the U.S. smartphone market with the Ascend P1.