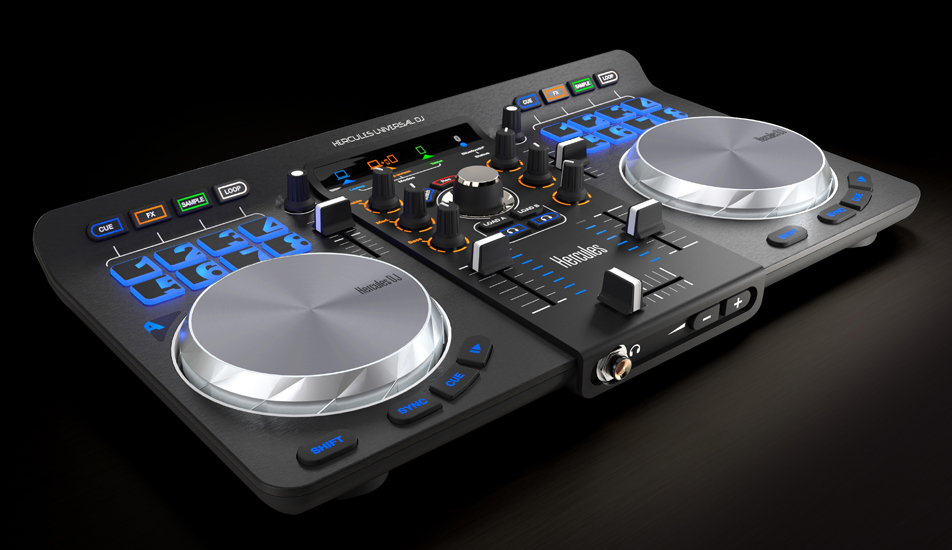 I can’t tell you how old I feel right now. I can remember it like it was yesterday though, carrying a crate of drum and bass records down the hall in my college dorm and practicing on my friend’s turntables. Actual vinyl records on actual Technics 1200 decks. People would funnel in and out of the room, some to hang out and enjoy the music, others to complain about having to study for exams.

Like poker, DJing is an easy skill to learn but an extremely difficult skill to master. The Hercules Universal DJ certainly won’t make you a master on day one, but this nifty and affordable device will have almost anyone mixing and more in no time.

As rusty as I was after more than a decade since I had last stood behind a set of turntables, the learning curve with the Universal DJ isn’t steep at all. And the setup couldn’t be easier; install Hercules’ free DJUCED software on your computer, plug the Universal DJ controller into a USB port, and you’re done.

There is also a DJUCED app for the iPad that costs $4.99, and whether you connect the controller to a Windows PC, a Mac or an iPad, your music library is instantly accessible.

The controller itself combines two decks and a mixer with a sampler and in-built effects. Also of note, the decks are actually capacitive touch wheels that respond both to actual spinning and to touch.

It took me no time at all to get the basics down, thanks in large part to the fact that DJUCED does a lot of the heavy lifting for you. The tempo of each track is calculated and displayed quickly in a BPM box, and waveforms are visualized so you can see exactly what’s going on at any point in a song long before playback arrives there.

There are also visual tools that assist with beat-matching, and hardware and software functions alike are all fluid and responsive.

Beyond the device itself, there is a social aspect to the Hercules Universal DJ. Playlists can be shared with partygoers, who can then vote for their favorite tracks on their phones and impact your set list. You can even join the crowd and control the unit with a free DJUCED Master app on your iPhone or Android phone.

Hercules’ latest offering is a lot of fun, but it also means business. The Universal DJ is an inexpensive solution that is a terrific value for such a low-cost device. In fact, it even won a CES Innovation Award earlier this month.

A promo video that runs through some highlights is embedded below.