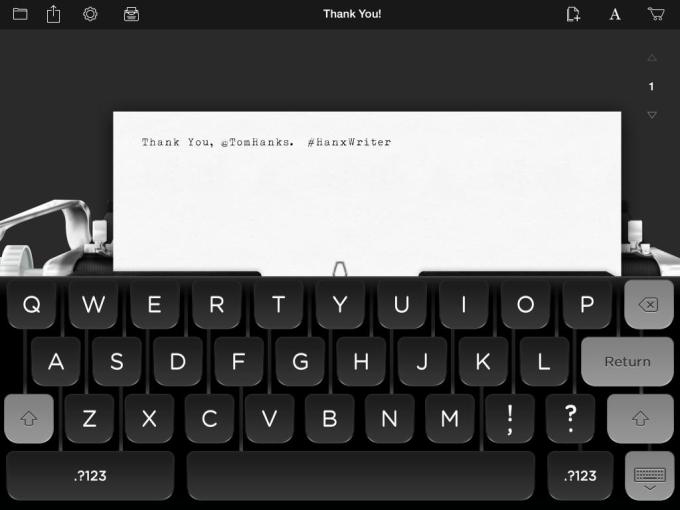 Hanx Writer is a simple typewriter iOS app for the iPad, created by Hitcents at the request of Oscar-winning actor Tom Hanks. Launched only last week and available as a free download, the app has already hit the No. 1 spot in the top free iPad apps on the App Store, TechCrunch reports, enjoying unexpected success for an app that’s not at all essential to improving productivity on a tablet.

The app offers users access to a keyboard that looks and sounds just like a typewriter – culled from one of Hanks’ actual collection of real typewriters – but also complete with the modern functionality of a virtual tablet keyboard.

“I wanted to have the sensation of an old manual typewriter – I wanted the sound of typing if nothing else…cause I find it’s like music that spurs along the creative urge. Bang bang clack-clack-clack puckapuckapuckapucka… I wanted the ‘report’ of each letter, each line,” Hanks told Apple’s @AppStore in an interview on Twitter.

The app might not be suitable for a “term paper or legal brief,” but it could be just the right thing for notes, journal entries or love letters, the actor said.

It also may be the single keyboard / note-taking app that will require headphones when used in public places.

Hanks isn’t the only star to come up with a mobile app, with Kim Kardashian’s Hollywood app coming immediately to mind, but his app might be a bit more useful. And yes, Hanks’ app does come with in-app purchases that give users access to other typewriter models, but they’ll less likely to fool unsuspecting children into paying for in-app content like the other app from a star does.

Hanx Writer currently has a 4.5-star rating in the App Store, from over 1,600 reviews, and can be downloaded by following the link below.