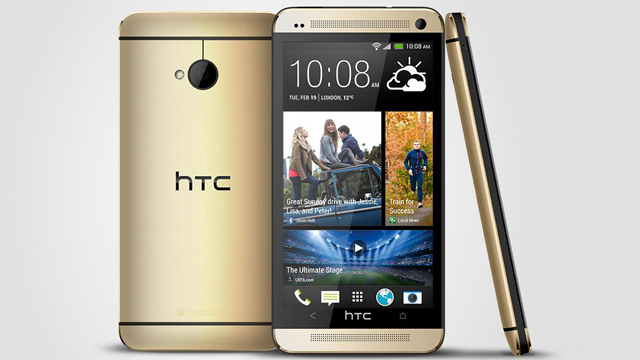 HTC on Monday announced a new gold color option for the HTC One in European countries, thus taking on the gold versions of Apple’s iPhone 5s and Samsung’s Galaxy S4. Unlike the 18-carat gold HTC One MOBO-branded device that costs $4,500 and was first shown about a month ago, the new HTC One handset only comes with a gold paint job and is just one of many color options for the HTC One including silver, black, red and blue.

Except for the gold color, there’s nothing new about this HTC One model. It’s basically the high-end same device HTC launched in early 2013 sporting a new color option. While the new version has been made official in London, actual prices and availability dates have not been mentioned.

In September, Apple launched its new flagship handset in a gold option, a first for the iPhone family and a color that turned out to be quite a success. Before the iPhone 5s started selling, Samsung came out with its own gold Galaxy S4 model in selected markets and tried to remind buyers that it actually sold various gold handsets in the past, long before the gold iPhone 5s became official.

London, November 25th, 2013 — HTC, a global leader in mobile innovation and design, today unveiled its award-winning HTC One flagship model in a sophisticated new colour. Available across Europe and building on the existing colour portfolio of Silver, Black, Blue and Red, the new HTC One in Gold packs the power and acclaimed features of this premium model into a brushed body with black accents that oozes luxury and style.

Philip Blair, President of EMEA commented, “Building on the all metal design of the HTC One, and the recent success of the HTC 18 carat gold MOBO phone, we are excited to have developed our own gold device, offering yet more choice to consumers”.

The HTC One has won international recognition for its stunning design. With its striking brushed finish and metal unibody design, the latest shade makes gold the glamorous colour of the festive season and a must-have for starting 2014 in style.

This latest addition to the family comes with all of the features of the HTC One, including HTC Zoe, HTC BlinkFeed and HTC BoomSound. The device will be available across Europe with a number of partners.