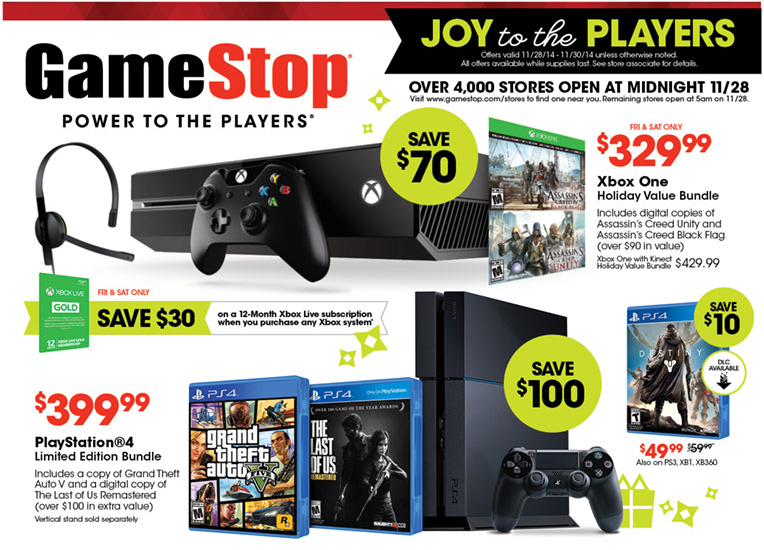 GameStop on Tuesday officially announced its Black Friday 2014 deals, publishing the full Black Friday ad on its website, even though it had leaked online a few days ago. The company is offering many gaming-related deals this Black Friday, but buyers will also be able to buy smartphones, tablets and other consumer electronics from GameStop.

FROM EARLIER: Here are all of the best Xbox One and Xbox 360 Black Friday deals

Most GameStop locations will open their doors at 12:01 a.m. local time on Black Friday, with the company saying that buyers who do not want to wait until midnight to take advantage of the deals can purchase their desired items online on Thanksgiving Day, and receive free shipping on all purchases.

Here are some of the video game products GameStop is highlighting for Black Friday:

GameStop’s official Black Friday ad is available in full at the source link, and the press release follows below.

GameStop has great deals on new and pre-owned video games, consoles, accessories, and smartphones, tablets and other consumer electronics

To help customers save even more money this holiday, GameStop expects to give nearly $250 million dollars in cash or credit through buying customers’ video games and consumer electronic products

Stores closed on Thanksgiving Day, but will open at 12:01 a.m. on Black Friday

GRAPEVINE, Texas–(BUSINESS WIRE)–Black Friday is right around the corner and shopping enthusiasts should take note. Today, GameStop reveals the great deals it will be offering gift-givers and gamers alike on Black Friday, as well as remind customers about the different forms of currency it is providing to help customers pay for their holiday purchases. For a complete list of this year’s Black Friday deals, customers can visit http://www.gamestop.com/blackfriday.

Most GameStop stores are scheduled to open their doors at 12:01 a.m. local time on Friday, November 28. Holiday shoppers will find the greatest selection and some of the best deals on new and pre-owned video games, consoles, accessories, and the latest consumer electronics. Those customers who do not want to wait until midnight to take advantage of the GameStop deals can shop online Thanksgiving Day at http://www.gamestop.com and receive free shipping on all purchases.

“To get holiday shoppers ready for all the deals and excitement on Black Friday, GameStop is doing its part to help them find and purchase the video game and consumer electronic gift items on their shopping list simply and affordably,” said Bob Puzon, senior vice president of merchandising for GameStop. “Whether looking for the latest video game consoles or newly released game titles, or one of the thousands of pre-owned video game or consumer electronic products we offer, GameStop is the place for gift-givers this holiday.”

Some of the Black Friday deals GameStop will be offering include:

To help customers stretch their dollars and save even more money this holiday, GameStop is offering customers unique ways to pay for their purchases. Through its buy-back program, GameStop is expecting to give customers nearly a quarter of a billion dollars in cash or credit when buying their pre-owned video games, systems and accessories, as well as consumer electronics and interactive game figures.

GameStop is also offering other ways to help customers to pay for their holiday gifts. The new PowerUp Rewards credit card offers approved customers a special financing through the end of 2014 for purchases of $250 or more. Additionally, the company has expanded its layaway program to include more products this year so customers can pay over time. Today through Sunday, December 14, customers can reserve select video game consoles, tablets, accessories and headsets through the expanded layaway program.

Customers can also exchange unused gift cards they have from other retailers for GameStop e-gift cards by visiting http://www.gamestop.com/giftcardexchange. Finally, PowerUp Rewards members are encouraged to redeem their reward points toward the purchase of products available in the PowerUP Rewards catalogue.

For more information about GameStop’s Black Friday deals, please visit http://www.gamestop.com/blackfriday. And as a reminder, GameStop will not be open on Thanksgiving Day to ensure that all associates are able to celebrate the holiday with their families and friends.

*Selection may vary by store. While supplies last. No dealers. GameStop, Inc. reserves the right to cancel, terminate, modify or suspend the offer for any reason without notice. Offer good in the United States, Puerto Rico, and Guam only. Void where prohibited. iPhone®, iPad®, and iPod® (including images thereof) are registered trademarks of Apple Inc. GameStop is not affiliated with or endorsed by Apple Inc. © 2014 GameStop, Inc.