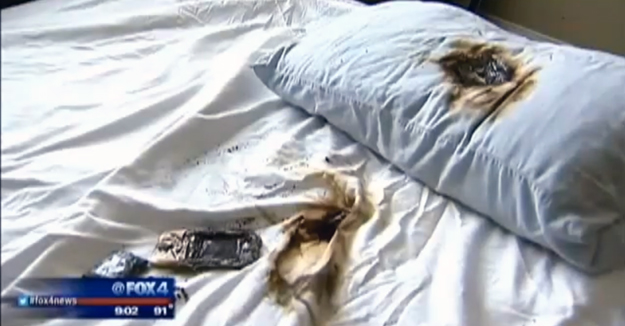 Let this cautionary tale serve as a reminder to everyone: don’t buy unauthorized parts or accessories for your smartphone. We have seen stories of combusting cell phones before, but perhaps none have been quite as unsettling as a new report from this past weekend. According to a Dallas, Texas-based Fox affiliate, a 13-year-old girl was awoken last week when she smelled something burning. As it turns out, the Samsung Galaxy S4 that she slipped under her pillow as she fell asleep had caught fire in the middle of the night and had begun to burn her pillow and sheets.

“I didn’t think much of it, so I went back to sleep and then I woke up again and it was more prominent,” 13-year-old Ariel Tolfree told KDFW. And it’s a good thing she woke up — pictures from the scene show that the phone had begun to badly burn the girl’s pillow and bed before it was extinguished.

As the girl’s father later admits, the battery in Tolfree’s phone was not an original Samsung part, but instead a third-party battery that is not authorized for use in Samsung devices. While third-party parts and accessories can often be cheaper than their OEM counterparts, the lower prices can clearly come at a cost.

The girl was not injured in the fire, though her father says that Samsung should display more visible warnings against using non-OEM parts in its phones.

A video of the report can be seen below.