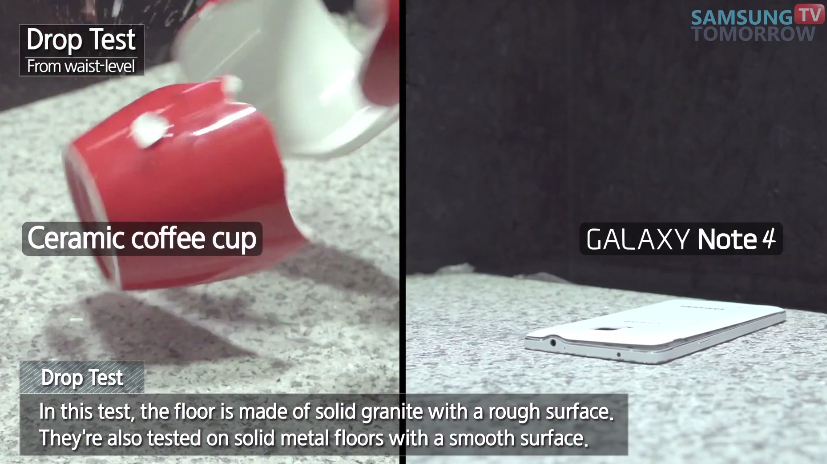 After posting its bending videos, Samsung continues its Galaxy Note 4 pre-launch promotion with a new video on YouTube that’s supposed to highlight the increased durability of the upcoming phablet. Unsurprisingly, Samsung’s drop test results suggest the Galaxy Note 4 can withstand drops from various heights without suffering any real damage — though don’t expect the back case to stay on during all drops.

FROM EARLIER: Samsung swears the Galaxy Note 4 won’t bend in your back pocket

Samsung performed many drops, both manual and machine-assisted, showing in its video that the handset’s display will not crack when dropped from various heights on tough surfaces and that the phone will continue to work. However, in some of those tests it’s clearly visible that the plastic rear case may come off.

“Thud. Oh shoot. Will it turn on? Is the screen okay? How much do I have left on my contract? What will it cost me to repair it? Many thoughts race through our mind in that horrendous moment we realize we dropped our phones. Yes it’s pretty safe to say that a cracked phone is one of our biggest fears,” the company wrote on its blog.

Unlike the supposedly real-life detailed drop test the Galaxy Note 4 will be put through by many blogs as soon as it launches, Samsung doesn’t mention other kind of drop-related phone damages such as scratches that are to be expected following such drops.

The iPhone 6 and iPhone 6 Plus have already been put through similar ordeals following their launch, being able to survive all drops in some tests, and cracking their displays in others — check out these iPhone 6 drop test videos here.