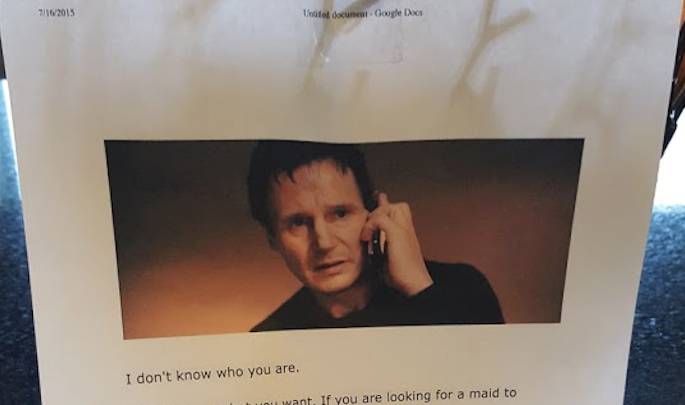 Moms and dads everywhere should check out the following threatening note that a fed up father wrote to his teenage kids after they had left the kitchen a mess one too many times.

Reddit user labuzan shared his hilarious, Taken-inspired note on the popular social network, complaining that his kids are really messy.

“Actually, my kids have their shit together. My oldest graduated high school a semester early and then got a 30 hour a week job to save money for college,” he explained later in comments. “My youngest has a 3.95 GPA in all IB classes and picked up a summer job for 30 hours a week. When it comes to the ‘big rocks’ of life, they are squared away. They’re just fucking slobs.”

The note itself is hilarious. Even if you haven’t seen Liam Neeson in Taken, you’re going to love what labuzan wrote, promising to “hurt” his kids where it matters most. Of course if you’ve seen the movies, then the note is obviously much funnier.

“I don’t know who you are,” the note reads. “I Don’t know what you want. If you are looking for a maid to clean up after you, I can tell you I don’t do that.”

The note continues, “But what I do have are a very particular set of skills. Skills I have acquired over a very long lifetime. Skills that make me an expert in home Wi-Fi systems and Cellular Data plans.”

You can read the entire note in the image below.