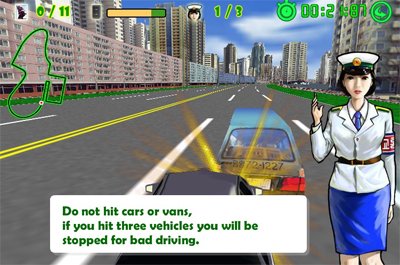 The goal of the game is to drive around the North Korean capital of Pyongyang and become familiar with all the great tourist attractions it has to offer. But unlike action-driving classics such as Crazy Taxi and the Grand Theft Auto series, Welcome to Pyongyang is annoyingly authoritarian and won’t put up with you crashing into cars or mowing down civilians. To make matters worse, the game doesn’t even give you the satisfaction dying at the hands of bloody-minded authorities if you break the rules too often — rather, it sends out a fascistic meter maid to simply tell you that you have been “stopped for bad driving.” We’re not sure what the actual penalty is for reckless is in North Korea, but we get the feeling it’s more severe than getting nitpicked by an annoying digital character.