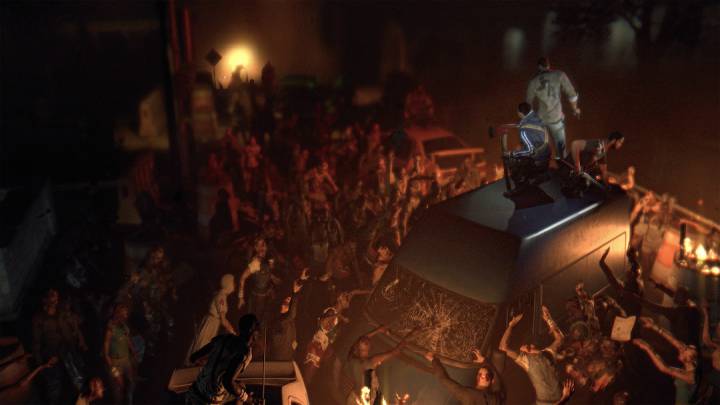 Dying Light is the last zombie game that I ever need to play.

Of course, the chances of it actually being the last zombie game I play are slim to none, but I don’t think any other development studio is going to be able to create as cohesive of a post-apocalyptic, zombie-infested wasteland as Techland has in Dying Light.

If you’ve never played or heard of Dead Island, this game might blow your mind. Dead Island was Techland’s first attempt at making a game like this, but its tone and its mechanics didn’t quite sync up, and the bugs marred the overall experience.

Dying Light is almost a reboot, but rather than simply retelling the same story or even refining Dead Island’s mechanics, Techland basically tore everything down and started from scratch, with only the core structure left in tact.

The hook of Dying Light, and the biggest departure from Dead Island, is the parkour. Kyle Crane, the protagonist, is as mobile as any video game character this generation. He can vault from rooftop to rooftop, climb precarious buildings and deftly escape the grasp of even the most agile zombies.

It’s not perfect – you will occasionally miss a ledge or slide down a wall – but for a world this vast to be so readily accessible with nothing but a series of jumps is an incredibly impressive way to structure an open-world game.

Unfortunately, the game seems intent on slowing you down.

There have been (and always will be) plenty of comparisons between Dying Light and Mirror’s Edge, but their most disappointing similarity is how often they break up the flow of your blissful momentum.

In Dying Light, there is a fatigue mechanic: after sprinting for long enough, Crane will begin to huff and puff until eventually he is forced to slow to a walk to catch his breath. Once he’s recovered, you can start running again, but this is one attempt at realism that I just can’t appreciate.

The stretches of Dying Light that are the most joyful are when you can string together a mind-boggling series of leaps and bounds to get from one area of the city to the next. Between the throngs of zombies nipping at my toes beneath me to the inevitability that I will miss a jump at some point, I don’t need the game telling me to slow down as well.

When you aren’t running, you’re probably fighting. The combat system as a whole is incredibly cool – scattered throughout the environment are countless planks, axes, hammers and bats that serve as your arsenal. The more you use an item, the quicker it will degrade and once you’ve used up all of its repair points, you have to toss it and find something new.

There’s an interesting risk/reward element to consider though, because you’ll also find upgrades for your weapons during your travels, which means that hoarders like me will end up saving a huge stash of upgrades to give my weapons increased durability or elemental status effects while I wait for the perfect weapon.

So while the system is deep and fun to explore, the issue is that I just didn’t often find myself having fun while engaged in a fight. I know I’m not alone in this, but there are plenty of critics and gamers who are on the complete opposite side of the fence.

All of that said, the character progression system feels meaningful and does make the game genuinely more enjoyable to play. Gaining the ability to finish a downed enemy or craft a DIY fire grenade makes fighting easier and more fun.

If you like first-person melee combat, you’ll probably find something to like here, but it all felt a little too loose for me. My hits felt satisfying, but often didn’t seem to be doing any damage, and the dodging was only really effective when I used it after every single hit.

Challenge in a game is important and necessary, but when the challenge is trying to figure out how to make a mechanic fun, it becomes a little grating.

But despite the fact that I could never find my place in the combat system, I quickly discovered that the real highlights of Dying Light are in the multiplayer modes.

Unlike in Far Cry 4, the entire campaign in Dying Light can be played through cooperatively. If you have friends with the game, this is the way to play. Having a buddy to back you up while you capture a safe house or wade into a crowd of zombies completely changes the way you play the game.

My favorite Dying Light moment so far happened when a friend and I were on our way to a mission as the sun had begun to set. At night, a group of terrifyingly fast and powerful zombies called Volatiles begin patrolling the streets and rooftops, waiting for you to enter their field of view. Once you do, they begin chasing you until you either outrun them or find a safe house.

But before any of that could happen, my friend was suddenly slaughtered by another player character — a player controlling a zombie.

There is a multiplayer mode in Dying Light called Be the Zombie, which seamlessly meshes with the campaign if you decide to turn it on. Basically, once night falls, the game will attempt to connect you with a zombie player who will in turn try to kill you while you track down his or her nests, scattered throughout the world.

I had only had a limited amount of experience with the mode, but I knew that we needed to shine our UV lights on the zombie when he got close enough in order to deplete his energy. Once his energy is gone, he’s basically helpless to fight back and has to escape (or at least try to).

After getting ripped to shreds a few times, we began to get the hang of the mechanics and started fighting back, taking out three nests while watching each others backs, before he finally trapped me in the back of a train car and ate my head (or something equally horrific).

It’s by far the most fun I’ve had in the game, and it also makes me realize that I still haven’t discussed the actual campaign.

That’s because there’s not much to discuss. The government wants to blow up the city, still full of survivors. Kyle Crane is the city’s last hope. A bunch of people want you to find stuff and do things for them. It’s a campaign.

I don’t mean to belittle it, because it serves the purpose of guiding you through a fun, rich world, but it really doesn’t do anything new.

The reason you should pick up this game is for the insanely fun traversal and the ability to run around an open world with a group of friends. If you can get past the trite mission structure and the imperfect combat, there’s a ton of fun to be had in this bleak, bloody apocalypse.

Warner Bros. provided BGR with a copy of Dying Light on PlayStation 4 for this review.