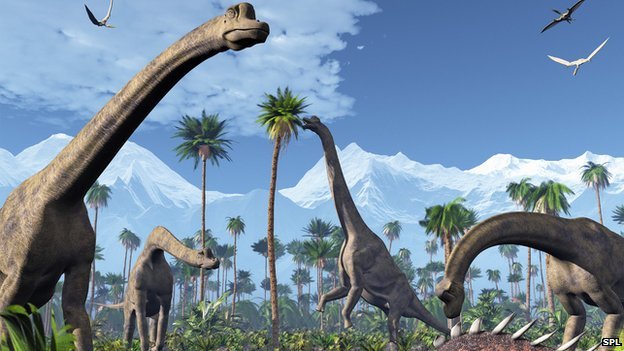 New research has revealed why it took more than 30 million years for large Triassic dinosaurs to populate the tropics after they first appeared on Earth, ending a mystery that has kept researchers baffled for decades. Using new geological evidence culled from Ghost Ranch, N.M., researchers from the University of Southampton in the U.K. have found that an extremely unpredictable hot and arid climate due to elevated carbon dioxide levels (four to six times of what they are today) kept large herbivorous dinos at bay until after 200 million years ago.

“For several decades, researchers have noticed a curious case: large plant eating dinosaurs seemed to be much more common at high latitudes during the Triassic,” Jessica Whiteside of the University’s National Oceanography Centre in Southampton told FoxNews.com. “However, it has only been in the past decade that we’ve realized they’re completely missing from the tropics, where only a few small carnivorous dinosaurs dwelled.”

According to Whiteside, researchers had suspected that climate had played a role, though no one had developed a detailed environmental record from the same sediments that also preserved extensive fossil vertebrate records (including small dinosaurs) – until now.  “Our major finding is that wild swings in climate and extremes of drought and intense heat have implications for survivability of Triassic vertebrates, including early dinosaurs.”

These “wild swings in climate” included raging wildfires that would sweep the dry landscape and continually reshape the vegetation that large plant-eating dinosaurs like Brachiosaurus, Diplodocus, and Brontosaurus would have fed on. These fires occurred every few dozen years and would reach temperatures up to 1112 degrees Fahrenheit. While these conditions suited smaller carnivorous dinosaurs such as Coelophysis just fine, the larger plant eaters decided to temporarily forgo equatorial areas for the higher latitudes.

“The large, plant-eating forms (the long-necked sauropodomorphs, predecessors of the giant Jurassic sauropods) are found from Late Triassic age sites in Europe, South America (Brazil and Argentina), South Africa, and the polar regions,” Whiteside said. “Essentially everywhere from the same time period except the tropics.”

The team culled their evidence from an area that’s no stranger to hot and arid climates– Ghost Ranch, N.M.  The scenic 21,000–acre retreat – famous as the place where artist Georgia O’Keefe painted for most of her career –  was located close to the equator 205-215 million years ago at 12 degrees North (it lies at 36 degrees North today).

According to Whiteside, the locale is an ideal spot for fossil hunting: “Ghost Ranch has a well-sampled vertebrate fossil record that includes early dinosaurs, as well as sediments appropriate for the investigation of the fossil pollen/spores, charcoal, and isotopes.”

After collecting rock samples that had been deposited by rivers and streams during the Late Triassic Period, Whiteside and her team analyzed the rocks by crushing them and putting them through chemical separation, measuring the stable isotopes of the elements carbon and oxygen. “The abundance of each element isotope (Carbon-13 to Carbon-12 and Oxygen-18 to Oxygen-16) is measured in a mass spectrometer,” Whiteside explained, “which separates isotopes by mass using an electromagnet; these isotopes are then counted by high-precision detectors.”

To estimate wildfire temperatures at the time, the researchers measured how much light reflected from the charcoal under a light microscope (this reflectance relates directly to the temperature at which it burned). As for the fossilized pollen and spores, after being extracted and chemically separated from crushed rock samples, they were mounted on glass slides and studied under a light microscope.

As cool as they sound, Whiteside pointed out that while none of these approaches are “bleeding edge”– the charcoal and isotopic methods have been around for the last 10-15 years or so – it was the way they put the data together that was novel.

“What’s most unusual about our study is the integration of the fossil vertebrates, fossil pollen/spores, fire temp estimates from fossil charcoal, organic carbon isotopes, and pCO2 [partial pressure of carbon dioxide] estimates into a single integrated record,” she said. This record would go on to depict a hot, dry, wildfire-ravaged climate that no large herbivorous dinosaur would stick its big toe in – or at least not until 200 million years ago.

Not only do these new findings answer a decades-old mystery, they also act as a warning. Though the carbon levels recorded over 200 million years ago were a few times higher than what they are today, they are predicted to reach those heights again in the next 100-200 years.

“Rapid climate swings and extremes of drought and intense heat driven by increasing atmospheric CO2 levels have as much ability to alter the vegetation assemblages supporting modern human populations, as they did for the large plant-eating animals in the Triassic (i.e., dinosaurs),” Whiteside explained. “[This] data therefore suggests there are potentially profound challenges to human sustainability in the future if we experience the high CO2 conditions predicted to develop.”