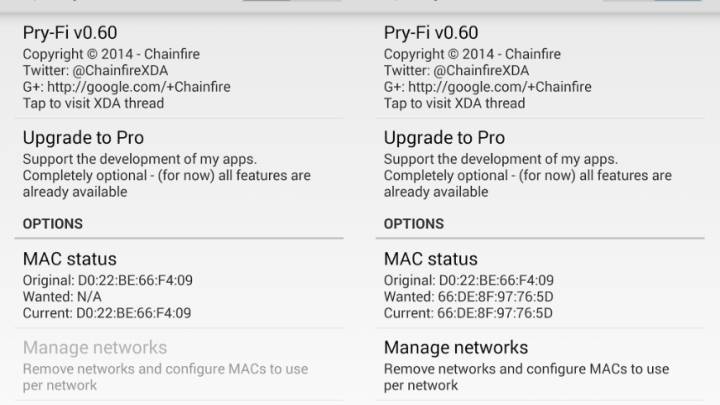 While a Rutgers University professor is working on an Android application that will tell you when other apps access the GPS functionality of your smartphone in order to track your location, well-known developer Chainfire has already released its first version of a new application called Pry-Fi. The incredibly useful new app can completely turn off Wi-Fi tracking without actually turning off Wi-Fi features of Android devices, in order to stop, or at least minimize tracking.

“Retailers, crooks, the government, and others shady individuals are tracking your movements. Even when your Wi-Fi is turned off, your phone may be broadcasting information to whomever is in range which can be used both to track repeated visits to as well as your exact movements in an area under surveillance,” Chainfire wrote on Google+.

One solution to stop tracking an Android device would be to completely turn off Wi-Fi, “including the background network scanning, a setting most people don’t know about.” However, such a measure will stop the Android device from automatically connecting to known Wi-Fi networks that are in range and from offering location-based features in apps.

Pry-Fi will keep Wi-Fi on, but hide your presence in a different manner. The app will help generate a random MAC address while it’s not actually connected to a known Wi-Fi network, with trackers thinking they’re tracking the device as usual. However, since the MAC address will keep changing, “retailers, crooks” or the government will not be able to track users, as the same MAC address will not be shown twice.

When connected to a Wi-Fi network, the MAC address used can also be randomized, and used only once to connect to the web. The next time the same network is joined, a new MAC address will be given. A “War” mode is also available for the app, which, when enabled, will make an Android device look like dozens of people, making the job harder for anyone tracking users in a certain Wi-Fi location.

Chainfire, the maker of other popular root-related application, said the app is in a proof-of-concept mode for now, and its development will depend on whether users are interested in such an app. The app is available in the Google Play Store as a free download, but requires a rooted Android device to be installed.

Recent reports detailing sophisticated bulk data practices from the USA’s NSA, the British QCHQ or Canada’s CSEC have revealed that spy agencies can use methods to track smart device users whose gadgets can connect to a wireless network. In addition to Wi-Fi tracking, government agencies can also track smartphones using data from cellular towers.