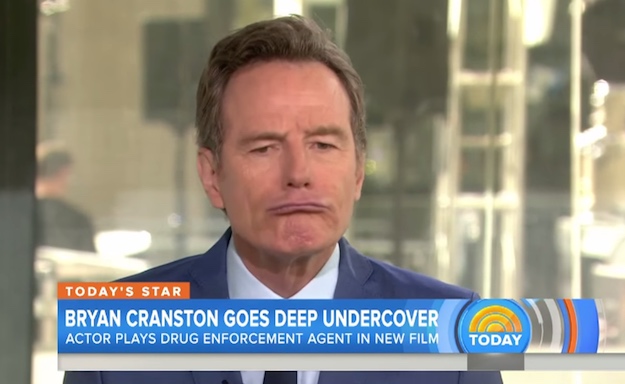 During a recent appearance on NBC’s morning show Today, award-winning actor Bryan Cranston revealed that he not only has world-class acting chops but that he’s also quite adept at impressions. After a few minutes spent discussing his upcoming movie The Infiltrator with Carson Daly, Daly asked the former Breaking Bad star what type of role or historical figure he’d like to play next. And interestingly enough, Cranston said he’d like to play Donald Trump.

“I’d like to play Donald Trump at some point,” Cranston explained. “He’s huge. He’s this Shakespearean character, this serio-tragic comedic character. Who wouldn’t want to take a bite out of that?” Not missing a beat, Cranston then pulls out a few Trump-isms that are remarkably accurate.

The pertinent portion of the video begins at about 3 minutes and 50 seconds in. And if you keep the video rolling, Cranston closes things out with a short, but equally impressive and accurate impression of Jerry Seinfeld.

Broadly speaking, the trajectory of Bryan Cranston’s acting career has taken on a rather fascinating arc. Starting out as a commercial actor, Cranston had bit parts in innumerable films and Television shows throughout the 80s and 90s. But of course, it wasn’t until he landed the role as the lovable goofball dad Hal on Fox’s Malcolm in the Middle in the early 2000s that he finally became a recognizable figure.

But what truly launched Cranston into the national spotlight was his masterful performance as Walter White on AMC’s Breaking Bad. Numerous awards and countless accolades afterwards, Cranston began taking on all sorts of interesting historical roles, including portrayals of President Lyndon B. Johnson (both on stage and on Television) and of Dalton Trumbo.

And who knows, perhaps sometime in the future Cranston will, in fact, be able to add Donald Trump to his already impressive Resume.