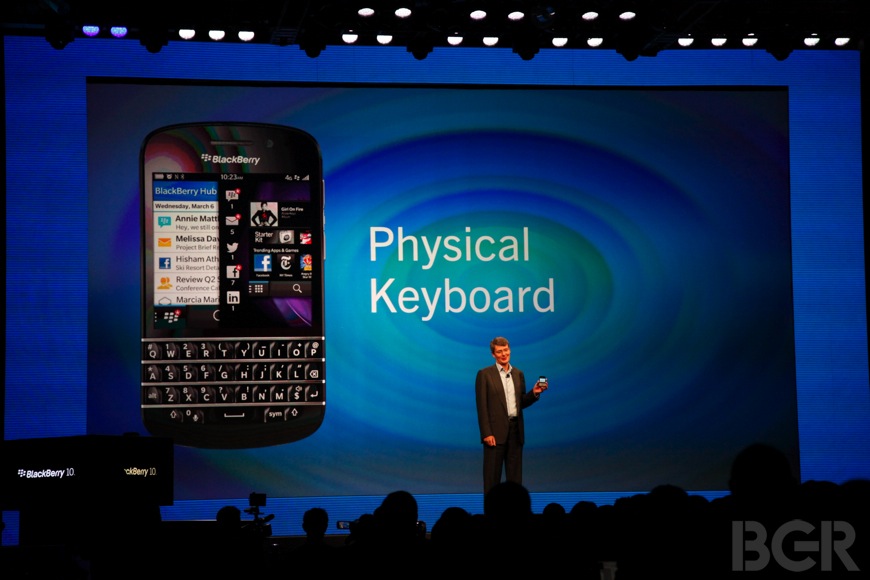 Last month Consumer Intelligence Research Partners caused a bit of a stir when it reported that BlackBerry’s market share in the United States had fallen all the way down to 0%. Now research firm IDC has come along with some slightly better news for the one-time Canadian smartphone titan: Its worldwide smartphone market share was more than 0% in the fourth quarter of 2013 and stood at a comparatively robust 0.6%.

This doesn’t mean that things are swimmingly for BlackBerry, however, as this figure represents a decline from the 3.2% market share it posted in the fourth quarter of 2012. In fact, IDC notes that BlackBerry’s overall smartphone shipments on the quarter were only at 1.7 million, which represented a steep decline from the 7.4 million smartphones it shipped in Q4 2012.

“BlackBerry was the only operating system to realize negative year-over-year change both for the quarter (-77.0%) and for the year (-40.9%),” IDC writes. “Moreover, its legacy BB7 outpaced BB10 towards the end of the year, definitely not the results that the company had hoped for when it released BB10 in January. With new leadership, management, and a tighter focus on the enterprise market, BlackBerry may in a better position, but still finds itself having to evangelize the new platform to its user base.”

Android and iOS Continue to Dominate the Worldwide Smartphone Market with Android Shipments Just Shy of 800 Million in 2013, According to IDC

FRAMINGHAM, Mass. February 12, 2014 – The smartphone market passed an important milestone in 2013 when worldwide shipments surpassed the 1 billion mark for the first time, driven by continued momentum from Android and iOS. According to the International Data Corporation (IDC) Worldwide Quarterly Mobile Phone Tracker, Android and iOS accounted for 95.7% of all smartphone shipments in the fourth quarter of 2013 (4Q13), and for 93.8% of all smartphone shipments for the year. This marked a 4.5-point increase from the 91.2% share that the two platforms shared in 4Q12, and a 6.1-point increase from the 87.7% share they had in 2012.

“Clearly, there was strong end-user demand for both Android and iOS products during the quarter and the year,” says Ramon Llamas, Research Manager with IDC’s Mobile Phone team. “What stands out are the different routes Android and Apple took to meet this demand. Android relied on its long list of OEM partners, a broad and deep collection of devices, and price points that appealed to nearly every market segment. Apple’s iOS, on the other hand, relied on nearly the opposite approach: a limited selection of Apple-only devices, whose prices trended higher than most. Despite these differences, both platforms found a warm reception to their respective user experiences and selection of mobile applications.”

While smartphone market growth remained strong in 2013, it should be noted that the era of double-digit annual growth has only a few years remaining. In the meantime, handset vendors are doing all they can to capture demand while it is still present. Worldwide smartphone marketing campaigns continue to stay focused on flagship devices like the iPhone 5S, Galaxy Note 3, and the HTC One, yet research shows that consumer buying is rapidly shifting toward products with significantly lower price points.

“In 2013 we saw the sub-$200 smartphone market grow to 42.6% of global volume, or 430 million units,” said Ryan Reith, Program Director with IDC’s Worldwide Quarterly Mobile Phone Tracker. “While the market moves downstream to cheaper products it makes sense for Samsung and others to continue their marketing investments geared toward high-end products. These efforts build crucial brand perception while having less expensive alternatives that closely relate to these top products helps to close the deal. Samsung has done exactly this with the ‘Galaxy’ line. The family name is associated with Samsung’s high-end products, yet there are ‘Galaxy’ variants offered by Samsung at much lower price points than the Note 3 and S4. This has been an important factor in how Samsung has sustained its market lead.”

Android finished the year where it began: as the clear leader in the smartphone operating system race. Samsung led all Android vendors with a commanding 39.5% share of shipments for the year. Worth watching is a crowded list of vendors jockeying for position in 2014, including Huawei, LG, Lenovo, Coolpad, and Sony. Should Lenovo’s bid to acquire Motorola Mobility be realized, the new company will leap ahead of Huawei, which was the number 2 Android vendor in 2013.

iOS posted the lowest positive growth for both the quarter (6.7%) and for the year (12.9%), underperforming the overall market in both instances. Although it remains wildly popular in the smartphone market, Apple has been criticized for not offering a new low-cost iPhone nor a large screen iPhone in 2013 to compete with other OEMs. IDC believes the company will release a large-screen version in 2014, but will not altogether abandon the smaller 4″ screen version of previous models.

Windows Phone posted the largest increase for both the quarter (46.7%) and the year (90.9%), with each nearly doubling the growth of the overall market. Nokia easily led all vendors with 89.3% market share, a testament to its expanding portfolio that addressed entry-level all the way up to large-screensmartphones. What remains to be seen in 2014 is how Microsoft’s acquisition of Nokia’s smart devices will propel volumes higher.

BlackBerry was the only operating system to realize negative year-over-year change both for the quarter (-77.0%) and for the year (-40.9%). Moreover, its legacy BB7 outpaced BB10 towards the end of the year, definitely not the results that the company had hoped for when it released BB10 in January. With new leadership, management, and a tighter focus on the enterprise market, BlackBerry may in a better position, but still finds itself having to evangelize the new platform to its user base.
Top Five Smartphone Operating Systems, Shipments, and Market Share, 4Q 2013 (Units in Millions)