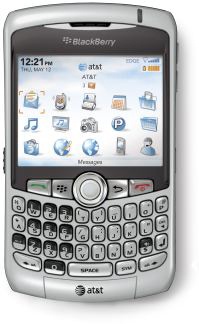 I know what everyone is thinking, “Please stop!”. We do have this on sort of confirmed authority: the BlackBerry Curve will be released this Thursday, the 31st of May. It should appear in all “distribution channels”, and AT&T will have their usual 90 day exclusive in the USA. By now we all know the run down — AT&T Mobile Music, 2 megapixel camera, spell checker, and AT&T’s Mall feature to buy ringtones and other downloadable content. Anyone interested in pricing? It will run ya’ $449.99 to buy it outright, $274.99 with a one year agreement, and $199.99 for a 2 year agreement with a $39.99 voice plan. That’s about it, check out the full “press release” after the jump!

BlackBerry Curve to Launch May 31
Exclusive to AT&T for at least 90 days after launch.
AT&T will launch the full-featured and much anticipated BlackBerry Curve on May 31 in all distribution channels. The BlackBerry Curve is exclusive to AT&T for at least 90 days after launch and is the smallest, lightest full QWERTY BlackBerry yet offered. It combines a compact design with many new features and broad international coverage.
With an exclusive, liquid silver finish and new trackball navigation system, the Curve is the first BlackBerry device to support AT&T Mobile Music, an enhanced media player, support for stereo Bluetooth headsets and a 3.5 mm headset jack. The device also features a 2-megapixel camera. The Curve is the first BlackBerry to offer spell-checker for e-mail, AT&T Push-to-Talk, TeleNav Maps and the AT&T Mall feature for purchasing ring tones and downloads.
The Curve offers support for phone, BES/BIS e-mail access, text messaging, Web browser, organizer, corporate data applications and more.
The quad-band BlackBerry Curve gives customers the ability to make phone calls in more than 190 countries and access e-mail and other data applications in 130 countries. All AT&T BlackBerry devices enjoy this advantage, giving the company the largest portfolio of BlackBerry products with global roaming capabilities of any U.S. carrier.
Special Note on Product Packaging at Launch
The BlackBerry Curve may also be identified as the BlackBerry 8300 on packaging and in-box materials for up to 30 days after launch.
Accessory packaging may have the BlackBerry 8300 designation for several months after launch. Please note these names refer to the same product. But in all customer-facing marketing materials (advertising, Web, merchandising), the BlackBerry Curve name will be used.
Other product highlights:
Dimensions: 4.21 inches x 2.36 inches x .61 inches; weight: 3.93 oz .
Excellent battery life: up to four hours talk time, up to 17 days standby time.
Supports expandable MicroSD memory.
Powerful 312 MHz processor.
BlackBerry Messaging (“IM-like” messaging to other BB devices).
Pricing
BlackBerry Curve will launch with a $100 instant rebate in BMG channels:
No Commitment – $449.99
One-Year Contract without $100 rebate – 374.99
One-Year Contract with $100 rebate – $274.99
Two-Year Contract without $100 rebate – $299.99
Best Price (two-year unlimited + $39.99 voice) – $199.99