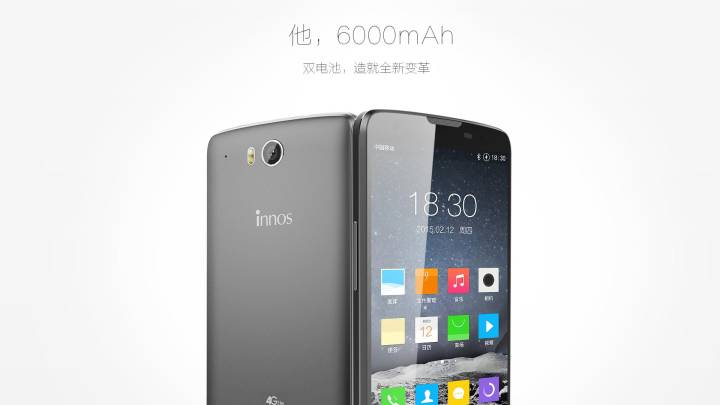 Now this is a phone that should give you at least a full day’s charge… and very likely at least three. GizmoChina brings us word that Chinese manufacturer Innos has just released a new smartphone that features a huge 6,000mAh battery, which just happens to be the biggest battery we’ve ever seen on a smartphone. Innos says this will deliver power that lasts between three to five days per charge depending on use.

DON’T MISS: Here’s the complete set of 38 new emoji coming to your phone next year

How did the little-known manufacturer pack so much battery power into what looks like a pretty thin device?

“The manufacturer uses a unique ‘Double cell structure’ technology,” GizmoChina informs us. “It comprises of two batteries, one being an internal carrying the 2480mAh capacity and another being an external replaceable 3520mAh juice pack. What is more, this great techallows user to swap the external battery without shutting down the device.”

Other specs for the device include a 5.2-inch 1080p display, a Snapdragon 615 1.8GHz octa-core processor, a 16-megapixel rear-facing camera, a 5-megapixel front-facing camera, 3 GB of RAM, 32GB of storage and Android 5.0 Lollipop.

The device costs only $290 off contract, although it’s not clear that it will be available anywhere outside of China in the near future. Check out the phone’s official website here.