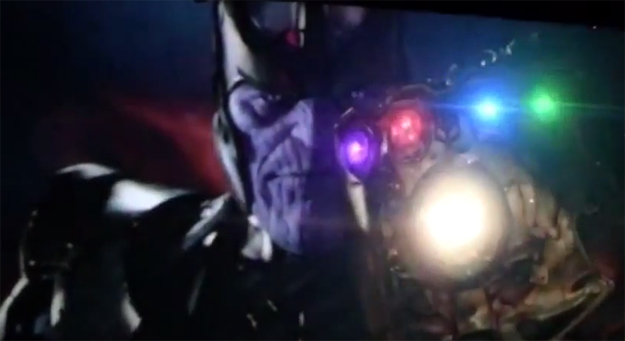 The huge event held by Marvel on Tuesday gave us the release dates of 11 new movies coming out between now and the end of 2019. Then, on Tuesday night, Marvel gave fans even more of Avengers: Age of Ultron with a clip from the film that followed ABC’s Marvel’s Agents of S.H.I.E.L.D. But no one expected what Marvel was about to unleash on fans next, after having given them so much good news about future releases.

FROM EARLIER: This is the incredible ‘Avengers: Age of Ultron’ trailer you’ve been waiting for

Marvel gave fans a teaser of Thanos and the Infinity Gauntlet that will be featured in Avengers: Infinity War parts I and II when they hit theaters in May 2018 and May 2019, respectively.

Check out the brief teaser for Thanos with the Infinity Gauntlet embedded below:

You didn’t think that was it, did you? It gets even better! Here’s the full trailer of  Avengers: Infinity War parts I and II, which was intended only for attendees at the Marvel event but has since leaked: