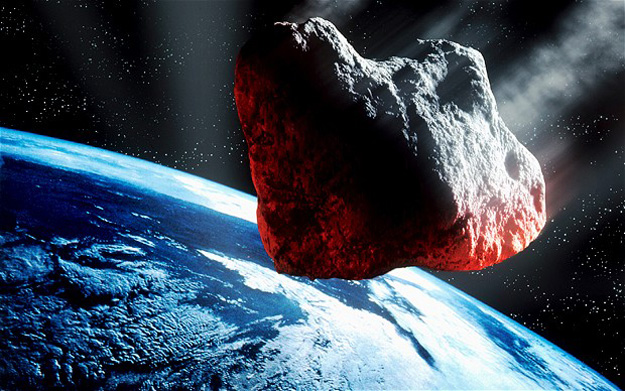 Talk about a scary Halloween. Earlier this week, reports emerged that a gigantic asteroid with a diameter taller than the Empire State Building will fly past Earth on October 31st. There is no danger of the asteroid making contact with us; it’s expected to pass at a distance of about 310,000 miles, which is further from our planet than the moon.

What is a bit frightening, however, is the fact that astronomers didn’t even know about the asteroid until about two weeks ago.

As EarthSky notes, we’re quite fortunate that asteroid 2015 TB145 is passing Earth at a safe distance. NASA discovered the asteroid only two weeks ago, which would have given us just three weeks to prepare, if the asteroid had been on course for Earth.

Of course, the giant space rock is traveling at speeds of about 78,000 mph so it’s unclear if any response would have helped if the asteroid have been aimed at us.

The three-week time frame is particularly interesting in light of comments made before the U.S. House Science, Space, and Technology Committee by NASA Administrator Charles Bolden back in early 2013. “From the information we have, we don’t know of an asteroid that will threaten the population of the United States,” Bolden said while discussing what he believed to be inadequate NASA funding. “But if it’s coming in three weeks… pray.”

In this particular case, NASA would have had quite a task should it have had to prepare for an impact from 2015 TB145. The massive asteroid is believed by EarthSky to measure 1,542 feet in diameter, though estimates range from 689 to 2,133 feet. For scale, the Empire State Building measures 1,454 feet from ground to tip.

NASA noted that the next time an asteroid this large is set to pass Earth isn’t until 2027. Of course, that doesn’t account for discoveries made just weeks before a fly-by.