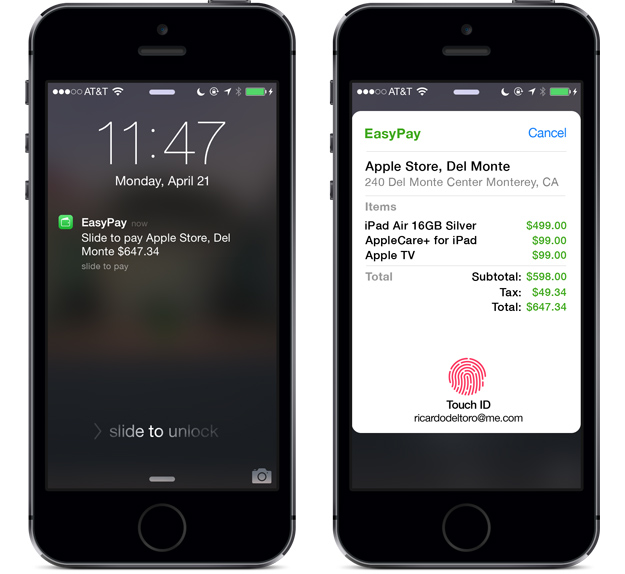 Nothing has been made official at this point, but it’s pretty clear that Apple is working on a mobile payment product. Chief executive Tim Cook touts the hundreds of millions of credit cards Apple has on file in iTunes accounts every chance he gets, and the obvious inference is that the people linked to these accounts will be potential Apple payment system users beginning on day one.

Touch ID on the iPhone 5s is another piece of the puzzle, as it will likely provide secure authentication for iPhone payments. Well, somewhat secure, at least.

We have discussed Apple’s seemingly imminent mobile payments product here on BGR a number of times, but one thing we have never done is imagine what the product might look like. That’s exactly what app developer and graphic designer Ricardo Del Toro did earlier this week.

“With WWDC around the corner, I thought about the future of Touch ID,” Del Toro wrote in a post on Dribble. “Touch ID is great, it’s incredibly accurate and works incredibly really fast. However, I would like to see Touch ID used in other areas, specifically the area of payments. I decided to design EasyPay.”

Del Toro’s vision of Apple’s “EasyPay” product is an API for developers that allows them to incorporate Touch ID fingerprint authentication and Apple’s mobile payment system into their apps. This would allow users to purchase goods online in apps or in physical stores using their iPhones.

“At checkout, the [EasyPay iOS] card would slide up and when Touch ID recognizes the correct fingerprint, it would initiate the payment through the iTunes payment system,” Del Toro explained. “The other possibility is retail. Implementing this type of experience in a retail environment is a more complex implementation. My idea for the experience of the transaction is this: walk into a coffee shop, or any retail environment and ask for the tab to be placed on EasyPay. EasyPay would send a notification to the iPhone in front of the counter using iBeacon technology and when Touch ID authorizes the payment, the iTunes payment system would direct the requested amount to the retail location.”

Del Toro noted that the in-store retail implementation of his EasyPay concept is complex, and this is something other mobile payment solution providers have had to address as well. Of note, reliable Apple insider Ming-Chi Kuo recently reported that Apple’s next-generation iPhone 6 and iPhone phablet will both include NFC.

“I believe the future of mobile is payments,” Del Toro concluded. “There’s a lot of room for improvement in that area.”

An Apple EasyPay website mock-up from Del Toro follows below.