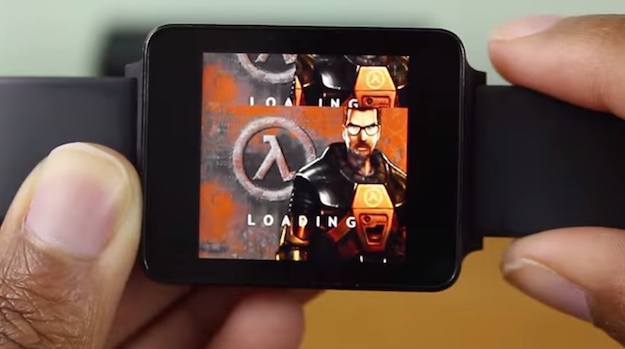 One of the chief criticisms levied at the Apple Watch in particular, and at smartwatches in general, is that there’s not really much you can do on such a small screen. So while we’re still waiting for developers to figure out how to squeeze a compelling gaming experience onto a small display, how about we sit back and watch Half-Life running on an LG G Watch.

DON’T MISS: YouTube just fixed the most annoying thing about your homemade videos

In the video below, Dave Bennett details how he was able to get Half-Life working on Android Wear. With an app called SDLash, Bennet is able to emulate Half-Life’s GoldSrc engine and get down to business. The game loads quickly, but the game play itself, not surprisingly, is a bit inconsistent at times.

Still, playing the game is more responsive than you might otherwise think, especially running on a device as small and relatively underpowered as a smartwatch. Is this at all practical? Of course not. But it might be fun as a little DIY project if you’re of the tinkering sort.

For a full tutorial on how to get Half-Life running on Android Wear yourself, make sure to check out Bennett’s detailed instructions via the source link below.