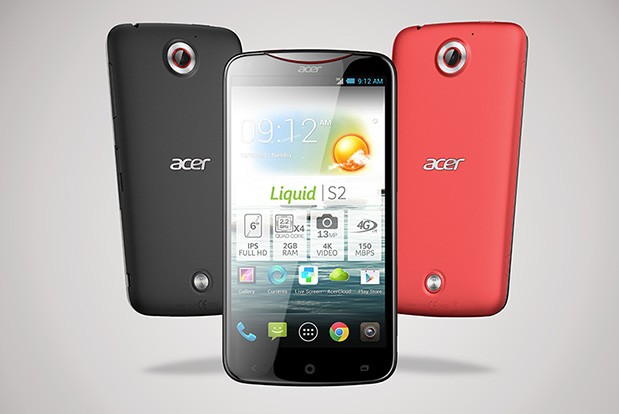 Acer phones typically aren’t all that exciting but the company has come up with a noteworthy addition to its latest flagship smartphone: The ability to record 4K video. The new Acer Liquid S2 has a camera that can record 4K video and features some other impressive specs as well, including a Qualcomm Snapdragon 800 2.2GHz quad-core processor, a 6-inch full HD display with a resolution of 368 pixels per inch, a 3,330 mAh battery, 2GB of RAM, 16GB of on-device storage and Android 4.2.2 Jelly Bean. Acer says that the Liquid S2 will release in October but declined to give exact pricing information at this time. The company’s full press release follows below.

BERLIN, Sept. 2, 2013 – Acer will unveil at IFA 2013 the new Liquid S2, a full HD 6″ with IPS technology 4K recording capable smartphone with ultra-fast connectivity including 4G LTE and the new Wi-Fi 802.11 ac standard. Following the recent successful launch of the Liquid E, Z and S series, Acer is now ushering in a different world of clarity with four times the resolution of full HD. This technology has been featured in some cameras already, but it’s a completely new experience with smartphones running on Qualcomm’s Snapdragon 800 2.2GHz processor capable of recording in 4K.

The real beauty of the smartphone is its iconic soft round curves and red elements for the receiver mesh and metallic ring highlighting the four LED ring flash for low light and macro capturing. The curved glass surface keeps a soft touch and “edgeless” feeling around the rim.

A touch of visual moments

The Liquid S2 combines the simple and visual interface with a 13-megapixel rear-facing camera to take professional looking photographs or videos with a smartphone. The front-facing 2-megapixel camera allows consumers to capture moments with an 88-degree wide viewing angle.

The Liquid S2 is loaded with several enhancements to capture reality:

This feature-packed Android smartphone will operate on 3G and 4G networks to boost customers with an average upload speed of up to 150Mbps. It will also support the latest Wi-Fi standard, 802.11 ac, offering significantly faster data transfer, better coverage and power efficiency when compared to today’s 802.11 n standard. The Easy Hotspot enables the smartphone to act as a mobile Wi-Fi router to share wireless internet connectivity with up to 6 Wi-Fi enabled devices. The internet connection can also be shared with QR codes and NFC.

Acer Float User Interface allows several app windows to stay open, so users can multitask without having to back out of one app to work on another. The press of a key brings up the Float Apps shortcut where apps on a translucent screen float over the function being used. It is easy to access or switch Float Apps anytime and can be customized with up to 7 favored app shortcuts. A Float Caller notification ensures that users will not be interrupted by incoming calls that take over the full screen. When a call comes in, the Float Caller mini-window pops up and the user can choose to take the call or reply with a quick message.

The latest addition to the Acer smartphone family is designed with a full HD display with IPS technology and 368 ppi for brilliant, stunning graphics on the 6-inch screen with a wide viewing angle. It is 8.99 mm thin and has two stereo speakers powered with Dolby Digital Plus for a stunning sound experience. The Liquid S2 also uses curved Gorilla Glass® 3.0 to boast native damage resistance, making it stronger and more resistant to scratches and daily usage than before.

Available in red or black, the Liquid S2 is powered by Qualcomm’s quad-core 2.2GHz processor, 2GB of internal memory and 3300 mAh battery for extended use on a single charge. Users can store a large library of photos, music and videos on the expandable memory of up to 128GB to complement the standard 16GB on-board storage.

The Liquid S2 version will be available at the end of October in. Exact pricing and availability will be announced at a later stage.