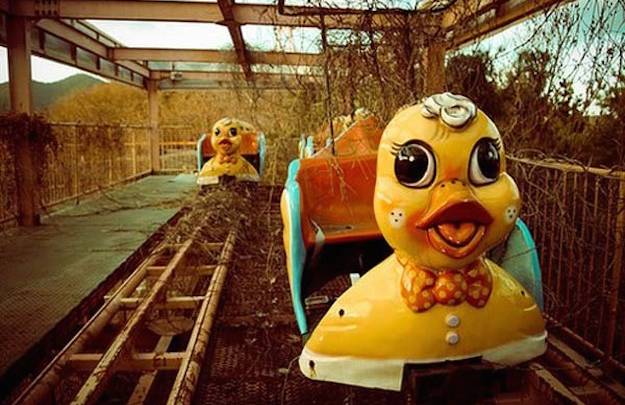 Recently, photographer Seph Lawless, who has an affinity for taking photos of abandoned structures, set his sights on amusement parks. Some of his photos, which together comprise a book of over 200 photos, are downright chilling. Below are three such examples of Lawless’ work.

These two photo was taken in Okpo Land, a rather shady amusement park in South Korea which closed down in 1999 after a string of fatal accidents. Following the 1999 death of a young girl on the duck-themed ride pictured above, the owner of Okpo Land closed the amusement park and disappeared.

Above is a photo of a what a Six Flags in New Orleans looked like after it closed down in 2005 following Hurricane Katrina.

This photo is of an amusement park in the Ukraine which was abandoned immediately after the Chernobyl disaster. Interestingly enough, the park itself opened up just one day after the nuclear disaster, and closed shortly thereafter. As a point of interest, the amusement park has made a cameo or two in various video games, including Call of Duty 4: Modern Warfare.

It’s time to amp up the creepiness factor with this photo of an abandoned amusement park in Zanzibar.

This abandoned amusement park in Tohuku, Japan closed in 2000.

This photo is from Dunaujvarosi Vidám Park in Hungary which closed in 1993.

This photo is of the Miracle Strip Amusement Park in Panama City Beach, Florida. This park closed down in 2004.