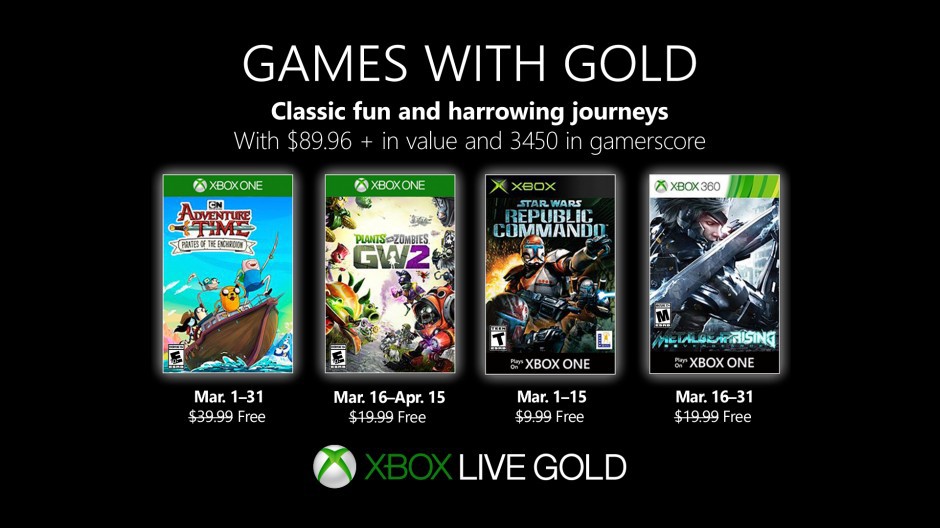 For the first time ever, there are more free games on the list of Xbox Games with Gold than there are free games for PlayStation Plus subscribers. This is due to the fact that Sony is no longer giving away PS3 and PS Vita titles every month, while Microsoft continues to hand out free (and backward compatible) Xbox 360 titles.

More importantly, it’s a fairly eclectic and interesting collection of game’s for next month’s Games with Gold. If you have an active Xbox Live Gold subscription, you can download an Adventure Time RPG and a Plants vs. Zombies shooter. But the Xbox 360 titles appear to be the real gems of March, as we’ll be getting the classic FPS Star Wars Republic Commando and the brilliant action spinoff Metal Gear Rising.

You’ll save about $90 if you pick up all four games, and can add a bunch of points to your gamerscore. Also, keep in mind that each of the Xbox 360 titles are backward compatible with the Xbox One, so even if you don’t have an Xbox 360 on hand, you can still download all four games listed above. And as always, some of last month’s free games are still available if you hurry, so be sure to download them before they go back to being paid.