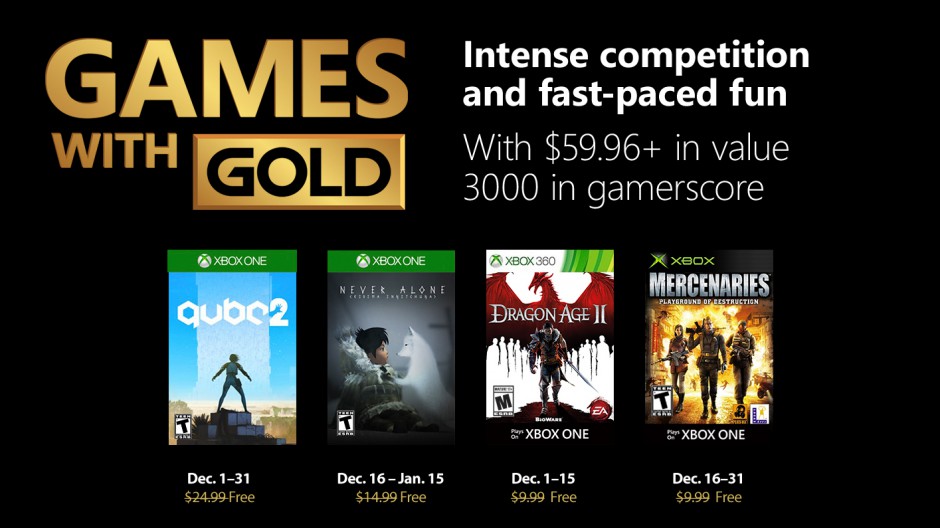 Whether you bought a new Xbox One while they were on sale over Black Friday or have owned one for years, you will probably find something to like in the latest selection of free Games with Gold. It’s not often that the highlight of the month is an Xbox 360 game, but if you’ve never played Mercenaries: Playground of Destruction, you owe it to yourself to download it in December and blow everything up in its huge open world.

Once you’re done blowing stuff up, you can relax with puzzle game Q.U.B.E. 2 and adventure game Never Alone for the Xbox One. And if you still have some free time after all that, which was one of the last BioWare games that pretty much everyone seemed to like. Just remember that you’ll need an Xbox Live Gold subscription.

You’ll save nearly $60 if you pick up all four games and can add a bunch of points to your gamerscore. Also, keep in mind that each of the Xbox 360 titles are backward compatible with the Xbox One, so even if you don’t have an Xbox 360 on hand, you can still download all four games listed above. And as always, some of last month’s free games are still available if you hurry, so be sure to download them before they go back to being paid.