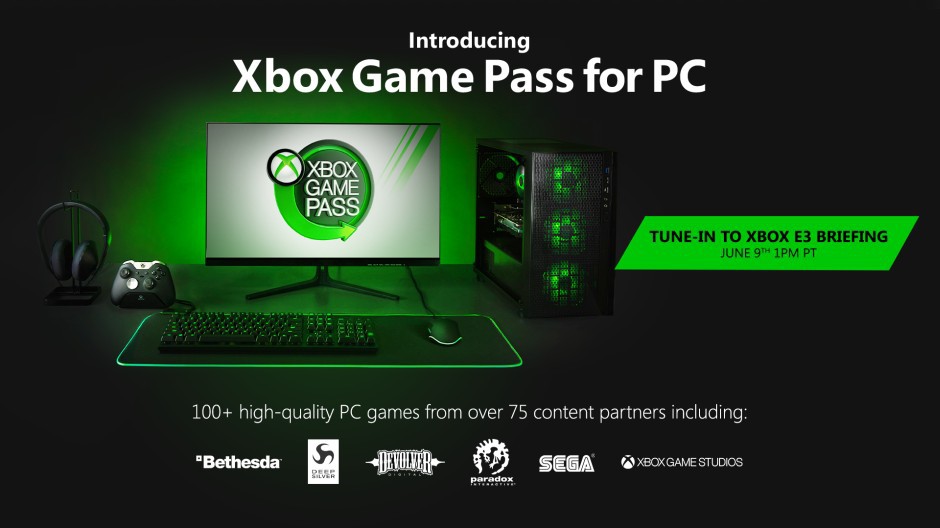 We’re still a couple weeks out from E3 2019, but Microsoft decided not to wait that long to reveal that its Xbox Game Pass subscription service is coming to PC. Although it has the same name as the Xbox One service, Microsoft says that Xbox Game Pass for PC is “a new experience” that will serve PC players and game developers.

Microsoft says that its new subscription service will feature a library of over 100 games from more than 75 developers and publishers, including Bethesda, Deep Silver, Devolver Digital, Paradox Interactive, and SEGA. Microsoft will also include all Xbox Game Studios titles in Xbox Game Pass for PC on the same day they launch, including upcoming games from recently acquired studios, such as Obsidian and inXile.

“Two years ago, we launched Xbox Game Pass on Xbox One, and since then we’ve seen how valuable a curated library of high-quality games can be for players and game developers alike,” said Xbox head Phil Spencer in a blog post. “It offers a great way to discover and play your next favorite game. We researched whether a similar opportunity exists for PC players and PC game developers, and we believe that it does. We also considered the importance of bringing something new and additive to the PC gaming ecosystem, and we believe that we can. So, we designed a service specifically for the needs of PC gamers and PC game developers. It’s called Xbox Game Pass, just like the original, but it’s a new experience that we are building together with the PC community.”

In addition to unlimited access to a library of 100+ games, Xbox Game Pass for PC subscribers will also get discounts of up to 20% on games in the Game Pass library and up to 10% on related DLC and add-ons. Microsoft didn’t tell us how much Xbox Game Pass for PC will cost, when it will launch, or which games will be available when the service arrives, but more details will be revealed at the Xbox E3 2019 Briefing on June 9th.