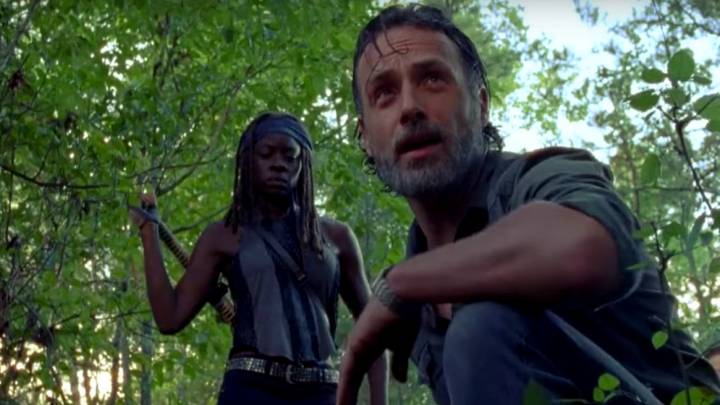 The Walking Dead is back, and I have to say I love what I saw in the mid-season premiere on Sunday night. We’ve got plenty of characters involved in the action, and we finally have action worth getting excited about. Rick finally has a reason to smile again, and so do I. In fact, AMC may have made The Walking Dead great again.

Before I ruin episode 9 for anyone who hasn’t seen it yet, I’ll give you fair warning: Expect plenty of spoilers ahead.

Episode 9 is all about Rick’s call to action that we kept seeing in the trailers AMC released over the past few weeks — and unlike other trailers this season that teased events that were not actually shown in the episodes that followed them, this time we got exactly what we saw in the trailers.

Rick and the Alexandrians make their case against Negan, but they’re treated similarly at The Hilltop and at The Kingdom. The communities want to fight, especially The Hilltop, whose people are already in awe of Maggie. But the leaders of these towns still want to peace with Negan. King Ezekiel, I suspect, might be a lot more eager to go to war than Gregory, and he also seems to be a far more courageous leader. He’s ordered people into battle before, but he’s not going to pull the trigger as quickly this time around.

What’s even more exciting is that there’s one more group of people out there. It’s a group that has plenty of people and plenty of guns, and they end up capturing Rick and friends just as the mid-season premiere comes to a close.

Rather than showing any kind of fear or distress, Rick shows a big smile. Surrounded, outgunned, and outnumbered, he knows these are the soldiers he was waiting for. These men and women will fight alongside the Alexandria veterans and whoever else decides to join. This is a group that Negan may have not seen coming.

I often criticized The Walking Dead, questioning some of the decisions the writers made for these characters. But season 7, episode 9 is a reversal.

We see survivors doing smart things; people are finally manning that damned wall. Father Gabriel, whom many of us may have despised before, has a brilliant idea. He runs away with all the provisions and weapons to hide them from Negan. He must have realized the Saviors would come looking for Daryl, and that they might take more stuff with them — the Saviors actually turn up looking for their prisoner, and they come with trucks. They don’t find Daryl, and they discover that the Alexandrians have an empty pantry. Great job, Father Gabriel!

The priest is smart enough to leave a trail of clues so that Rick can figure out where he’s gone. We don’t see Father Gabriel again in the episode, but his rushed decision to take off with all the provisions is what helps Rick discovered the new community.

Moving on to Jesus, he’s got a radio from the Saviors that they can use to monitor their communications. That’s how they know the Saviors are about to visit Alexandria. And the other smart thing they do is to leave Daryl at The Kingdom, a place the Saviors have never visited.

The Walking Dead is still one of the best zombie TV shows even when it doesn’t deliver any zombie action. But in episode 9, Rick’s group discovers a massive booby trap on the highway meant to stop a horde, or anyone else. They quickly remove most of the explosives, following Rosita’s lead, and then Rick and Michonne dispatch a massive number of zombies by cutting them in half. All they needed was a couple of cars and a steel cable tied between them. This is probably one of the most exciting zombie sequences in the series so far, one that you must see if you haven’t watched it already.

Morgan and Carol also appear in episode 9. One advises caution against the Saviors rather than a full-blown war, while the other is out by herself in the woods. I’m still hoping Carol comes around; she’s definitely the kind of general the anti-Negan army will need.

As for Negan? Only his voice is heard in this episode — no nasty business in this one.

After last night’s show, I’m actually looking forward to seeing the remainder of season 7, and I can only hope AMC has fixed the show for good.