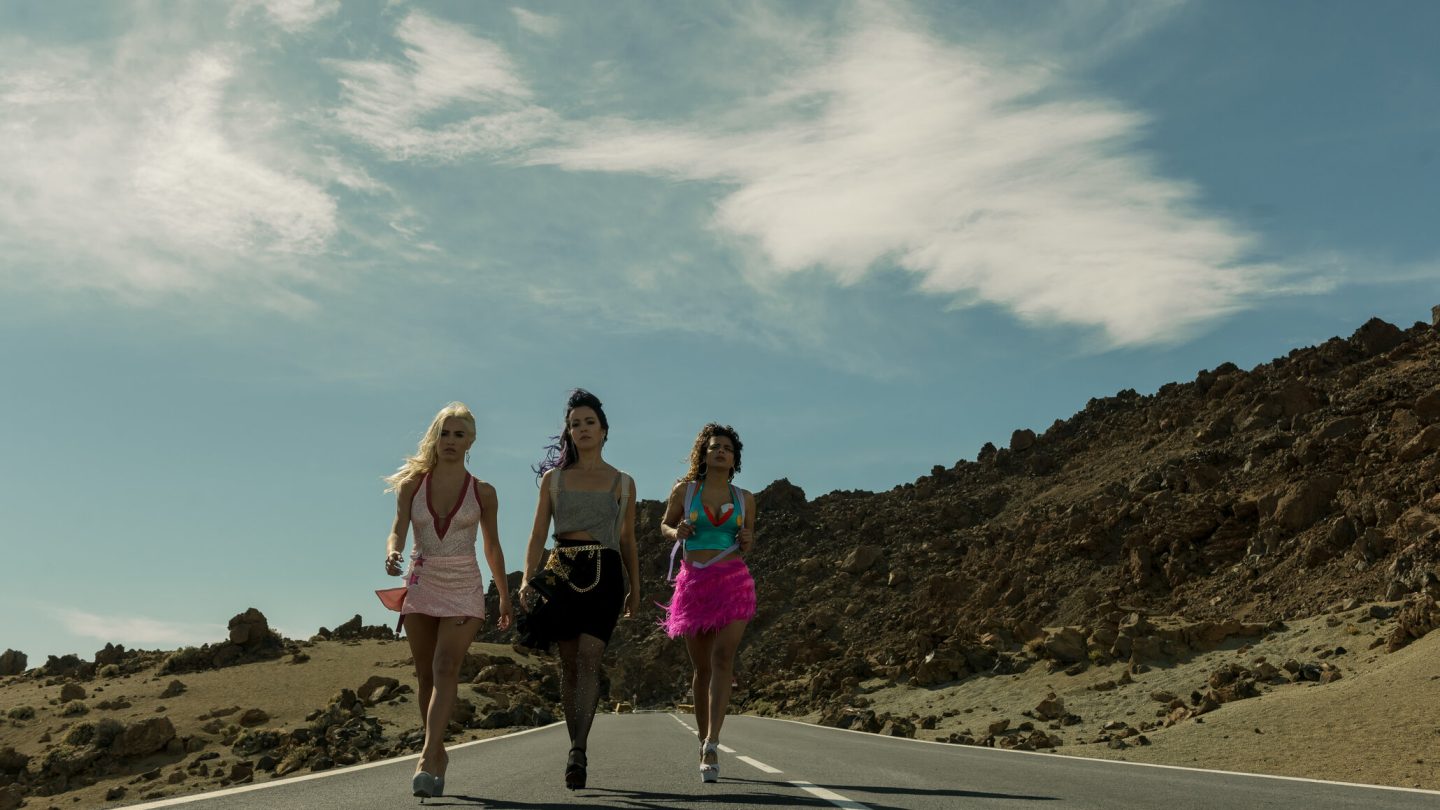 One of the biggest international pop stars in the world right now is a singer from Argentina: Lali Esposito, whose latest album Libro was released back in the fall. She’s a freakishly talented “reina de la musica pop argentina,” but she’s also famous for more than just music. She can act, too. Currently, she’s also a judge on Argentina’s version of the reality singing competition The Voice. And she also stars in one of my favorite new shows on Netflix right now. It’s Sky Rojo, a bloody, sexy, Tarantino-style Spanish-language series that’s loud, messy, escapist fun of the highest order.

The show’s second season debuts July 23, and these are a few of the many draws the series has going for it. First, exotic locales (it was shot across mainland Spain and in the Canary Islands). In addition, the three main women around which the show revolves are beautiful and captivating. And it doesn’t hurt that one of them is an international pop star. There are guns, shootouts, and an abundance of skin — since the three women are on the run, having escaped from a brothel. But best of all: Sky Rojo comes from the creators of Money Heist, one of Netflix’s biggest hit shows of all time.

New shows on Netflix in July

Because of all this, and more, Sky Rojo Season 2 is one of Netflix’s new July shows that I couldn’t be any more hyped for.

Another great thing about it is the episodes pack a punch. Because none of them surpass the half-hour mark, that means the creators have to make every second count. And, honestly, more TV should practice this. Moreover, as far as ratings go, the show’s Rotten Tomatoes scores are also pretty solid. As of the time of this writing, Sky Rojo has a 100% critics score and 76% audience score on the review aggregation site.

A quick recap of the plot: Coral, Wendy and Gina go on the run from their pimp and owner of the adult entertainment club Las Novias. It’s basically a race to stay alive for five more minutes. And then another five. And another. Avoiding henchmen and other dangers along the way.

And here’s a bonus for you Money Heist fans. Netflix got one of the stars of that show, Ursula Corbero, to film a short clip praising Lali and tied it to Sky Rojo:

“Think about it. If you had an opportunity to steal — like, if you worked at a bank, with the vault wide open. Nobody seeing you. Are you gonna do it, if you don’t get caught?”

The second of the new shows on Netflix coming soon that I’m chomping at the bit for is Heist. It’s a six-episode true crime docu-series that will tell the story of three separate heists in two-episode pairs. And one look at the trailer, below, was enough to get me excited all by itself. Piles of cash, guns, masks and private planes — Heist definitely has the makings of a super-bingeable hit for Netflix.

From Netflix’s description: “A 21-year-old woman steals millions in Vegas casino cash. An aspiring father swipes a fortune from the Miami airport … and uses TV shows to learn how to get away with it. A Kentucky dad is accused of one of the biggest bourbon burglaries in history.” The series, it continues, use “dynamic reenactments, original interviews, and a fast-paced style that fits perfectly into the cinematic canon alongside films like Ocean’s Eleven and Catch Me If You Can.”