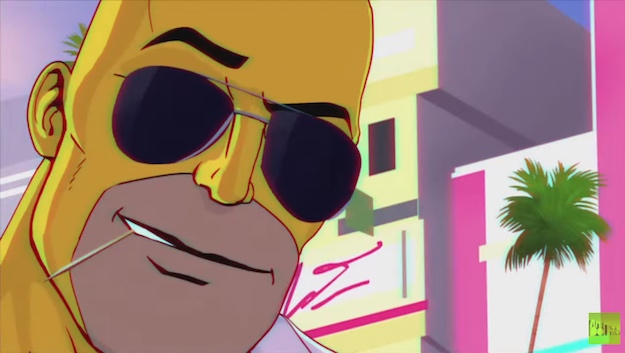 It’s crazy to think that The Simpsons has been on for 27 years and is still going strong. While die-hard fans will be quick to tell you that the show will never again enjoy the level of quality that marked the show’s first 10 seasons, keeping the jokes coming for nearly three decades is no small feat.

As anyone familiar with the show can attest, the opening credits to each episode consists of a creative and humorous depiction of each Simpson family member scurrying to the couch, a bit appropriately called the “couch gag.” To date, there have been 561 distinct couch gags, with some obviously being more memorable than others.

Later today, The Simpsons will air what is arguably their most ambitious, impressive, and visually stunning couch gag to date. Set to open up the episode “Teenage Mutant Milk-Caused Hurdles”, the new couch gag is an 80s inspired masterpiece which spoofs any and every 80s action show you can think of, from Miami Vice to Knight Rider.

The intro has it all; speedboats, stylized 80s action, the song “Push It to the Limit” from the movie Scarface and a whole lot more. You might also notice a few visual similarities to the video game Grand Theft Auto: Vice City.

As cliché as it sounds, you’ve truly never seen The Simpsons quite like this.

Even the names of the characters are great, with Homer starring as Joe “Kaz” Kazinsky and Ned Flanders starring as Fernando Whitmore.

Below are a few of the better stills, though the best ones is arguably of a tatted up Flanders pumping iron in a jail cell.

And last but not least, Flanders pulling of his best 80s drug lord impression.

And for any true Simpsons heads out there, you can check out an incomplete but borderline comprehensive montage of Simpsons couch gags below. The video below was put together in 2014 and lacks all of the newer couch gags. Still, there should be more than a few familiar ones in the bunch to enjoy.