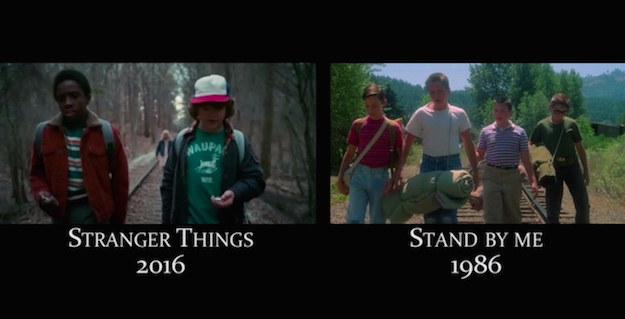 If you haven’t yet seen Netflix’s latest hit Stranger Things, set aside some time this weekend and dive into a show that some have already dubbed an “instant classic.” Set in the early 1980s, Stranger Things is an original, enthralling and — at times — heartwarming sci-fi show that pays subtle homage to iconic 80s films that have stood the test of time, from Poltergeist to Stand by Me. As one astute review of the show said, Stranger Things “doesn’t just reference ’80s movies. It captures how it feels to watch them.”

Now if you’ve already seen the show, I’m probably preaching to the choir. That being the case, I’ll get right down to it: French director Ulysse Thevenon recently put together a supercut detailing all of the scenes from Stranger Things which reference popular 80s movies. While some examples — the parallels to E.T., for example — are overtly obvious, there are quite a few references to films like Commando and Aliens that you may have missed.

So sit back, relax, and enjoy a stroll down memory lane. For those curious about whether or not we’ll be graced with a second season of the show, all indications point to yes. An official announcement hasn’t yet been made but Netflix CEO Reed Hastings recently said that it “would be dumb not to” green-light a second season.

For those looking to keep count, the full list of movie references reads as follows: The Goonies, Alien, E.T the Extra-Terrestrial, Firestarter, Poltergeist, Close encounters of the third kind, A nightmare on Elm Street, Explorers, The Shining, Stand by me, Carrie and Commando.