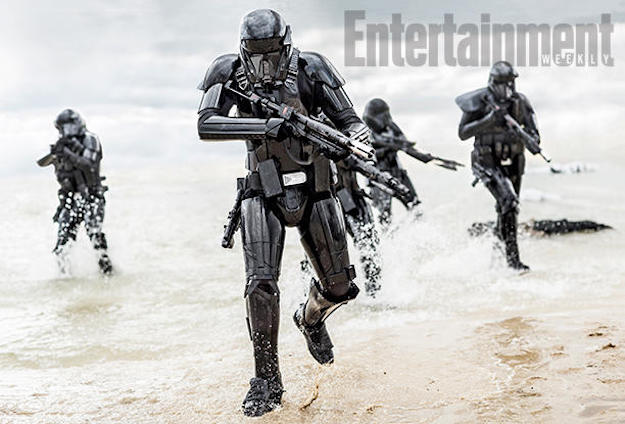 In fact, fans are so anxious for the movie that any hint of trouble behind the scenes turns into a newsworthy catastrophe, as was the case when several publications began reporting that Rogue One: A Star Wars Story would be undergoing significant reshoots this summer. Now, weeks later, Edwards has spoken to Entertainment Weekly for their cover story to set the record straight.

“I mean it was always part of the plan to do reshoots,” he explains. “We always knew we were coming back somewhere to do stuff. We just didn’t know what it would be until we started sculpting the film in the edit.”

Although some of the initial reports regarding the reshoots made explosive claims — like that 40% of the movie would need to be reshot — EW’s sources were clear that this would be all but impossible in the five weeks Lucasfilm has scheduled for additional shooting. Furthermore, The Force Awakens had weeks of reshoots the summer before its release as well, but it didn’t cause a stir like this.

“There’s lots of little things that we have to get, but it’s all little things within the preexisting footage,” Edwards said when asked about the nature of the reshoots. For example, some shots with groups of actors had to be pushed to the summer to accommodate their schedules, because “everyone’s on different films all over the world” before, during and after principal photography.

“It’s funny, making a film stops you believing anything you’ve ever read on the Internet,” said an “exasperated” Edwards regarding the rumors.

Lucasfilm president and Rogue One producer Kathleen Kennedy backed Edwards up, saying: “There’s nothing about the story that’s changing, with a few things that we’re picking up in additional photography. I think that’s the most important thing, to reassure fans that it’s the movie we intended to make.”