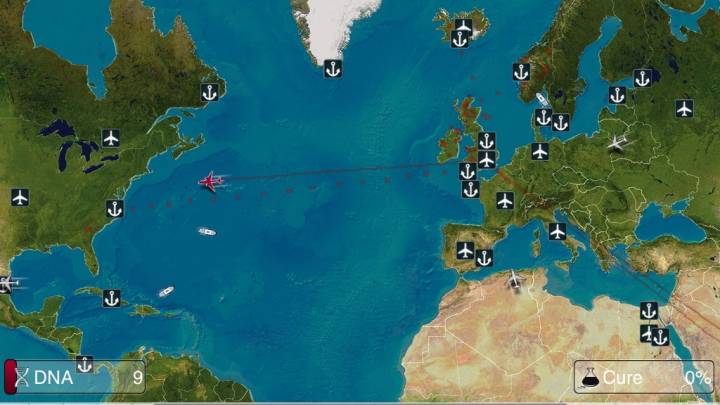 Over the weekend, I decided to download a smartphone game I’d never attempted to play before, from Ndemic Creations — the team behind the improbable hit title Plague Inc., a game for iOS and Android devices that has just introduced an incredibly timely new game mode. Whereas, before, players attempted to spread an infectious disease far and wide, in the game’s new “cure mode” you essentially take on the mantle of something like the World Health Organization — and you race to keep the plague in check long enough for a vaccine to be developed in-game, but all while commercial flights are still zipping around the world map, seeding the virus across the planet. You accumulate points based on taking the right actions, and you “spend” those points on all the myriad tasks needed to bring a pandemic under control — building hospitals, running contact tracing programs, enforcing face mask mandates and lockdowns. You get the idea.

Having never played the game before — and intrigued by the fact that not only has it been praised by the CDC, but the gamemakers also received input from the WHO and the Coalition for Epidemic Preparedness Innovations — I decided to give this pandemic simulator a try. Living through months of the real-world impact of the same kinds of decisions you make in this game thanks to the coronavirus pandemic — well, needless to say, I was quickly immersed. I found myself wanting to yell at the screen to make these insane people stop taking flights all over the world, while I’m trying to put out pandemic brushfires to try and control the disease which I randomly decided to name “COVID-19.” Bottom line, this game blew me away.

You can download Plague Inc. from the iOS App Store here and from the Google Play store here. You start by choosing what type of plague you want to fight. A “bacteria”-based outbreak was the only available option for me, so from there it was on to naming the pathogen and also choosing a game difficulty level. I went with “Normal,” which the game describes as being “for experienced pandemic strategists” in which politicians are “vaguely competent,” experts are “mostly listened to,” and health care systems are “unprepared.”

If you really want to give yourself a challenge, you can choose the “brutal” difficulty level. What does that one entail? “Sick people inject disinfectant, leaders ignore science (and) doctors (are) arrested for reporting disease.”

Okay, once we’re all set up — and I’ve made the decision to ignore the tutorial you’re offered, since I’ve never read the instructions for a video game in 40 years and I’m not about to start now — you’re in the middle of it.

All at once, there’s an outbreak of my disease in the Middle East, which is soon awash in the red indicator dots that let me know a problem is multiplying. Commercial flights are constantly moving around the world map on the game’s main screen. I quickly surmise that I’ll need to invest and continually reinvest in the activities that will minimize the spread of my pandemic and keep a lid on its consequences while a vaccine is in development.

Eventually, you fall into a rhythm. You race to adjust your focus on new outbreaks, while keeping an eye on places where the pandemic is already spreading. I move field teams around the world, from hotspot to hotspot. I’m watching my point balance accumulate, so I can spend them as soon as I rack them up — I’ve got to get PPE distributed, start education campaigns, and implement quarantines when things are starting to look too dicey in the hardest-hit places.

Plague Inc: The Cure is out now on iOS & Android!

CEPI CEO Richard Hatchett has said the game “encapsulates the complexities of a global pandemic response and highlights how crucial international collaboration is needed to address such a threat.” You’ll quickly understand what he means.

I kept checking in on the progress of the development of a vaccine that would ultimately end my pandemic, and it was thrilling to finally see the progress bar full — at which point I was dismayed to have the game inform me a problem has emerged. I had not invested enough in vaccine manufacturing, so there would be a bottleneck. I would have to keep playing whack-a-mole with my “COVID-19” pandemic longer than I should have, while a new progress bar re-started and updated me on the status of working through this problem.

Eventually, after the stress of moving all these pieces around the world and frantically trying to keep everything under control — to varying degrees of success; I want to apologize to the people of Germany, who eventually revolted at my leadership and refused to wear face masks — I did it. The vaccine was finished, and it’s incredibly satisfying to watching it being distributed around the world and all the hotspots eventually wiped out.

It feels strange to acknowledge that something as seemingly inconsequential as a smartphone game can change how you think about the current COVID-19 crisis, but this one absolutely can. More specifically, it’s easy to come away from this with a deeper appreciation of the herculean effort that’s required to bring the pandemic to heel around the world. And I already know that I’ll feel the same way in the real world as I did when the game version of my pandemic was finally conquered — absolutely crushed at the staggering number of lives lost throughout the pandemic, before the end, at last, arrives.