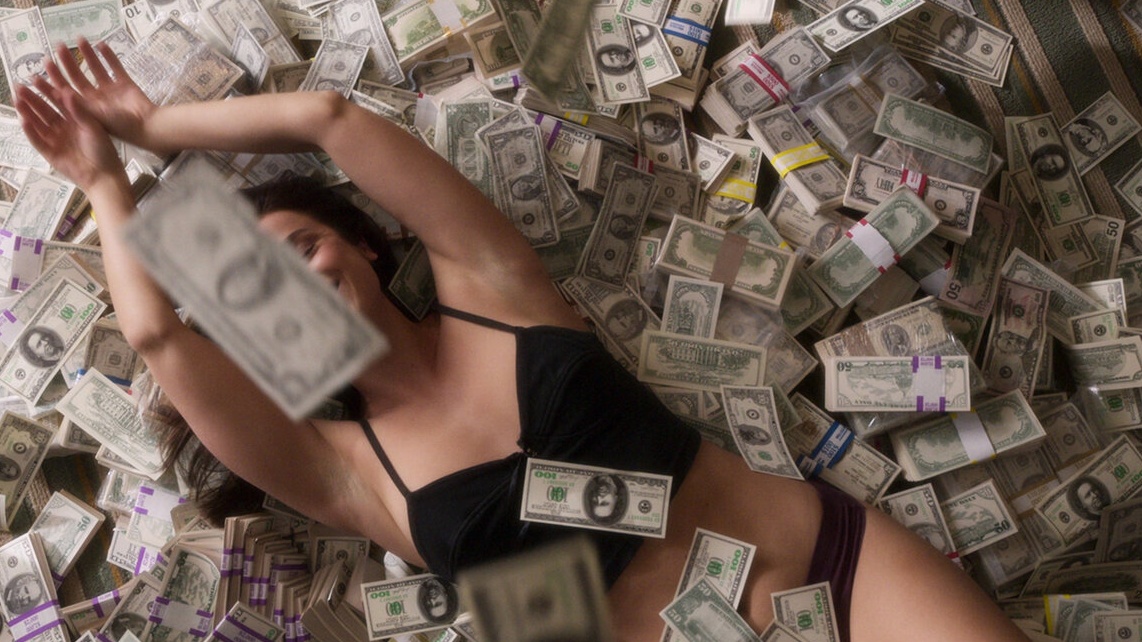 In the opening moments of the new Netflix docuseries Heist, the door handle of a private plane — which appears to be parked at an airstrip, somewhere in the mountains — pops out. The door itself, one of those fancy airstairs, slowly descends to the ground. An elegantly dressed chauffeur wearing black gloves is waiting off to the side. Inside the plane, a stern-looking man wearing black sunglasses helps an elderly woman wrapped in a blanket undo her seatbelt. She leans on him, and they slowly shuffle down the aisle toward the door. Out into the sunshine. Down the stairs. At the bottom, she sinks into a waiting wheelchair.

Her companion pushes her toward the chauffeur, and once they settle in, the man pushes a button, causing a screen to slide up and obscure the passengers in the back seat from the driver. At which point, both the man and old woman immediately start making out. And amid the heat of passion, her wig slips off — to the couple’s obvious delight. Breathe. Exhale. They got away with it. “Here I am, 22 years old,” a female narrator’s voice then says. “Being whisked away by the man I love.”

From that first episode of Netflix’s Heist, titled Sex Magick Money Murder, we’re thrown into a world of killers, con men, and thieves. There are six episodes in all here, with three separate real-world heists told over two episodes each. And the link between them? Men and women, from Las Vegas to Miami and points in between, willing to break the law in their pursuit of the Big Score.

Heather Tallchief is the woman we meet in that first episode. The one with the old lady disguise. According to Netflix’s synopsis, she’s a woman who “gives in to hypnosis and aids career criminal Roberto Solis in a plot to steal $3.1 million from an armored truck in Las Vegas.” All three heists detailed in the series make for fantastic stories, this first one especially.

Lovers, thieves, and a heist in Sin City

In brief: Tallchief had started driving for the armored truck company Loomis in Las Vegas, back in the early 1990s. While her co-workers were inside Circus Circus, loading ATMs inside the hotel, Tallchief drives off in the truck (which had some $3 million inside). Solis was waiting at a storage unit. There, they transferred the cash into a waiting car, loaded it all into boxes and shipped the loot to Miami.

The pair then drove to the airport and boarded a chartered plane, in the aforementioned disguises. They hopscotched around the country, ending up in Miami. So, to recap — the thieves made off with the money. They sent it on ahead of them and caught up with the cash in the Magic City. Finally, they flew to St. Maarten. Avoiding the FBI the whole way.

Here's the first thing you need to know if you want to try and steal 100 million dollars.

Heist is now on Netflix pic.twitter.com/1TbUxmrbLa

From the show’s official synopsis: “21-year-old woman steals millions in Vegas casino cash. An aspiring father swipes a fortune from the Miami airport … and uses TV shows to learn how to get away with it. A Kentucky dad is accused of one of the biggest bourbon burglaries in history. Using dynamic reenactments, original interviews, and a fast-paced style that fits perfectly into the cinematic canon alongside films like Ocean’s Eleven and Catch Me If You Can, (three directors) each take the helm of a single heist, told over two episodes.”

A review in The Guardian (“Netflix cashes in with sexed-up crime spree extravaganza”) probably sums up this series best, calling it “fun, trashy and titillating.” Indeed, the individual stories themselves veer increasingly into “This can’t be real, can it?” territory. That, above all else, is what makes this series compulsively bingeable.

Like in Episode Two, titled The Money Plane. In which Cuban immigrant Karls Monzon, who lives in Miami, is trying to conceive with his wife. After two miscarriages, they decide to adopt a Russian baby. Because it’s so expensive, though, they decide to set a score in motion. One that calls for stealing $100 million hiding in an airport hangar. “I just wanted to steal enough money to adopt a child,” Monzon claimed. That’s how it started. The lies we tell ourselves.

The big question that the Netflix Heist series tries to get viewers to consider is: “What would you risk for the score of a lifetime?” Think about it, one of the participants in the series asks. It’s the guy behind the rare bourbon heist, who at one point stares straight at the camera. And he demands to know: What if you worked at a bank, and had an opportunity to steal. With the vault wide open. Nobody seeing you. “Are you gonna do it, if you don’t get caught?”

Heist on @netflix is one of the best put together shows I’ve ever seen. This docuseries is wild.

This series ‘Heist’ on @netflix got me hooked like a criminal 😅

In certain people, the prospect of setting something like one of these heists into motion causes a switch to flip inside them. All of a sudden, they’ve crossed over. In other words, into that place where Bob Ford lived, in Rob Hansen’s novel The Assassination of Jesse James by the Coward Robert Ford:

“I’m afraid of being forgotten,” Bob said, and having admitted that, wondered if it was true. He said, “I’m afraid I’ll end up living a life like everyone else’s and me being Bob Ford won’t matter one way or the other.”