Netflix’s transformation over the past few years has been nothing short of astounding. Though the company’s early success rested entirely on mailing out DVDs to customers across the globe, Netflix CEO Reed Hastings had the foresight to recognize that media consumption was poised to change drastically with the proliferation of affordable and high-speed Internet. In turn, Netflix astutely shifted gears and made online streaming the core focus of its business. And following that, Netflix realized that the key to media dominance was a vast library of original content.

Before long, Netflix began rolling out a seemingly endless stream of compelling TV programming. And though Netflix’s first breakthrough original was a political drama (House of Cards), the company’s stable of original content today spans every genre imaginable. All that said, Netflix’s laser-like focus on developing original TV series has naturally led to a discernible decline in the selection of movie titles the streaming giant carries.

Over the last few years, Netflix’s library of movies has fallen dramatically. According to recently tabulated data from Flixable, the cumulative number of movies on Netflix in the U.S. now stands at 4,010. By way of contrast, Netflix back in 2010 housed 6,755 movie titles. Meanwhile, the number of TV shows on Netflix has increased three-fold, as evidenced via the chart below. 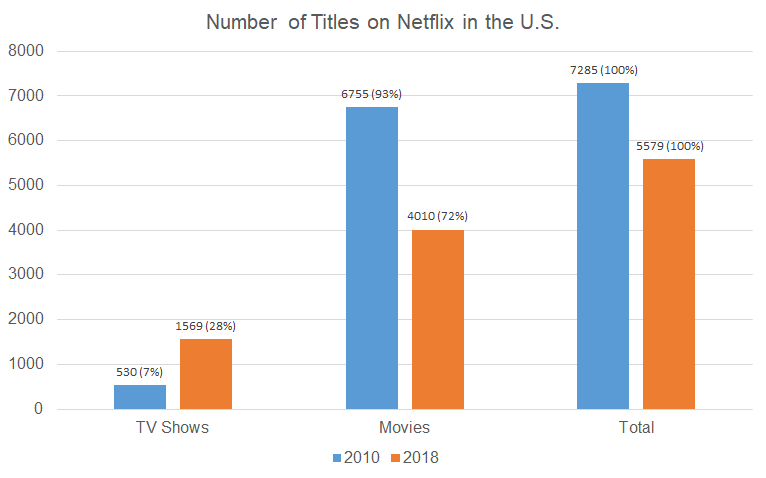 Interestingly, movies in 2010 accounted for a whopping 93% of Netflix content, a figure that has since dropped down to 72%.

All in all, the data above shouldn’t come as much of a surprise. Not only is Netflix primarily focused on generating original TV content, Netflix chief content officer Ted Sarandos a few years ago said that 66% of all Netflix subscribers don’t even watch movies.

Looking ahead, it stands to reason that Netflix’s movie library will continue to shrink as the company continues to double down on original TV programming. Throughout 2018, Netflix may spend upwards of $8 billion on developing new programs and licensing existing content.