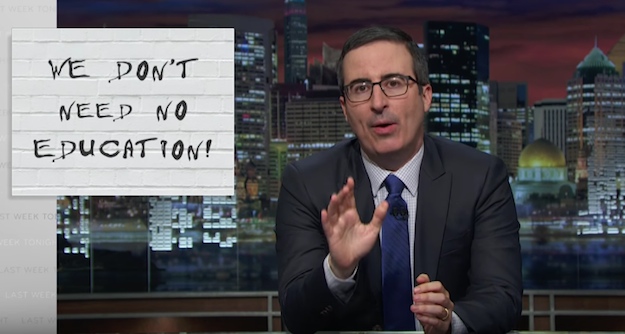 Comedy Central must be kicking themselves for letting John Oliver go because the former Daily Show comedian has been absolutely killing it on HBO’s Last Week Tonight With John Oliver for some time now. Far from your standard satirical or late night show, John Oliver each week chooses one topic to hone in on and then goes after it with surgical-like precision and wit.

This past Sunday, Oliver turned his attention to charter schools and highlighted many of the problems associated with them that often get brushed under the rug. While Oliver acknowledges that there are many things to like about charter schools he also isn’t afraid to point out their shortcomings.

“Charters are basically public schools that are taxpayer-funded but privately run,” Oliver explained at the beginning. “The first ones emerged 25 years ago as places to experiment with new educational approaches.”

“But critics argue that charters overstate their successes, siphon off talented students and divert precious resources within the school district,” Oliver went on to say.

“Now for this piece, and I know this is going to make some people on both sides very angry, we’re going to set aside whether or not charter schools are a good idea in principle. Because whether they are or not, in 42 states and in D.C. we’re doing them. So instead we’re going to look at how they operate in practice. One group found on average charters have a slight edge over traditional public schools in reading and about the same in math, but acknowledged charter equality is uneven across the states and across schools and that is putting it mildly.”

With that contextual backdrop, sit back for a good 18 minutes and enjoy John Oliver at the top of his game.