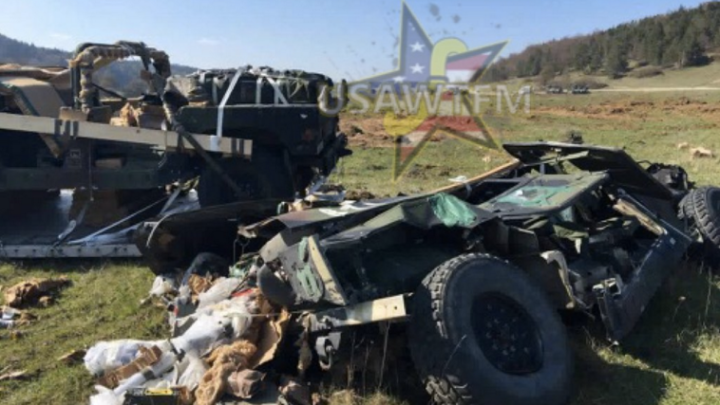 Earlier this month, the U.S. military accidentally dropped a few Humvees hundreds of feet through the air, at which point they prompted crashed into the ground. If your first thought was, “That sounds both incredibly terrifying and endlessly watchable,” you’re in luck — it was all caught on video.

According to the Army Times, the 173rd Airborne Brigade is currently investigating an airborne drop in which three Humvees were destroyed on impact after their parachutes failed to catch them during their descent.

The Army was conducting “a heavy drop and personnel airborne operation” on April 11th over the Hohenfels training area in Germany. 150 bundles, vehicles and other equipment was dropped from passing planes, but three Humvees slipped out before they were ready to deploy, resulting in the following video:

“The specific malfunctions that occurred on this day are under investigation,” Army spokesman Maj. Juan Martinez said in an email to Army Times. “There were multiple rehearsals and inspections of the equipment prior to mission execution. We cannot speculate on what went wrong until the investigation is complete.”

Photos of the incident began to circulate on Twitter as well:

Martinez added that the Army does not know who shot the video that has been watched over 1.5 million times on Facebook, but says disciplinary action is being considered (while the rest of us hit replay over and over).