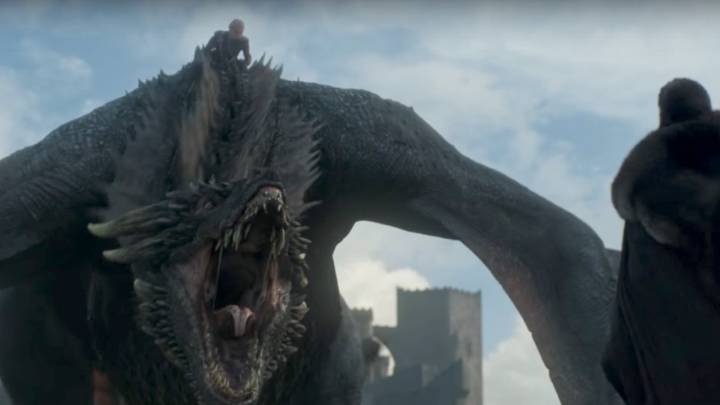 Walk away, person who didn’t see last night’s new episode of Game of Thrones. I’m about to spoil one of the biggest moments in the entire series, and a great moment in TV show-making history.

Episode 5’s trailer already hinted that we were in for a massive revelation. I thought that the climatic scene where Drogon faced Jon Snow for the first time ever was going to be it, making it clear to everyone that Jon Snow has Targaryen blood in him. Well… that wasn’t it. Sure, Daenerys was very surprised to see Drogon and Jon Snow become buddies, as the dragon immediately sensed he was in the presence of royalty other than his Mother.

But the great moment in TV history came much later, during what we’ll refer to as Samwell Tarly’s mid-life crisis scene.

After having clashed with his superior Maesters about their role in the events and politics of Westeros, we saw Tarly working at home while Gilly practised her reading. He’s pretty frustrated with how his training is progressing, and Gilly’s interruptions only anger him more. Gilly keeps throwing silly facts at him and then asks what an “annulment” is. She then proceeds to tell him that there was a certain Prince Ragger who wanted an annulment so he could marry someone else in secret in Dorne.

This is the moment where you shouted at your TV, if you’re a regular Game of Thrones watcher. This is when a character other than Bran is about to make a huge connection. That’s Rhaegar Targaryen in the story, who’s Jon Snow’s biological father.

Gilly just discovered proof that Targaryen had a relationship with Lyanna Stark, and that he married her.

Of course, this is also the moment where you shout curse words at Sam. He’s had it. He can’t deal with Gilly’s nonsense anymore, so we don’t hear the entire story because he interrupts her to rant about his job. We know from season 6 that Bran found out the truth about Jon. But the young Three-Eyed Raven rarely says everything he knows, and he might not be the first person to break it to Jon.

What’s great about this revelation is that HBO found an amazing way to deliver it. It’s not an annoying cliffhanger at the end of the episode or the series. It’s not even climatic. It’s a scene that’s as bland as it can possibly be. It’s the scene where you decide to reply to texts and check social media instead of paying attention. It’s a blink-and-you-miss-it scene. But it’s a critical moment for Sam, Jon, and the entire series even though nobody realizes it yet, except for the people shouting at their TVs. As soon as the revelation is made, we just simply move to the next element of the plot, and the episode continues for another 10 minutes.

Now we almost have written confirmation that Stark’s bastard isn’t a bastard at all. He’s a Stark, but also a Targaryen. And as the only living son of Daenerys’ older brother, he’s the next in line for the throne. We only have to wait for Sam to figure it all out.