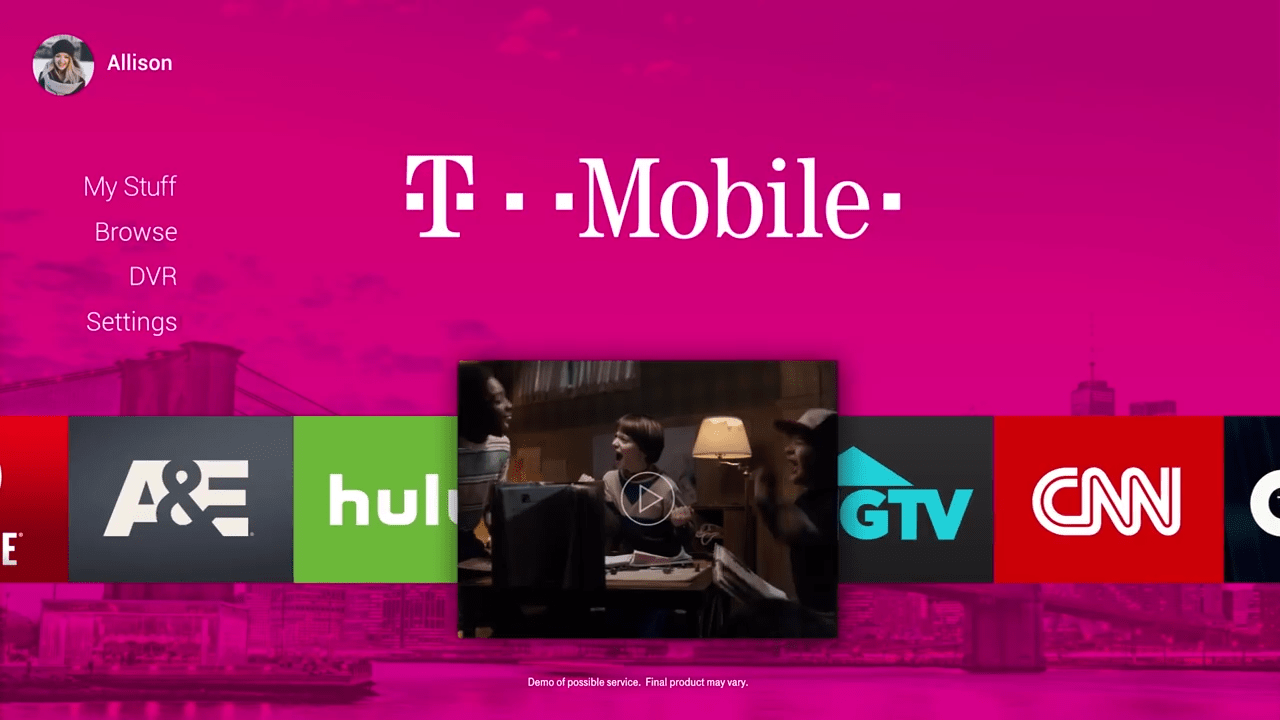 Late last year, T-Mobile announced that it had acquired TV company Layer3, a slightly oddball TV distributor that offers an expensive cable-esque TV bundle in a handful of markets. T-Mobile debuted the acquisition in its usual splashy way, saying that “we’re gonna fix the pain points and bring real choice to consumers across the country,” with some vague plan to have a cheap service with 250 channels.

Since then, we have heard precisely nothing about T-Mobile’s TV plans, or what Layer3 might be working on. That’s understandable, given that T-Mobile has since announced its plans to merge with rival Sprint. Thanks to regulatory documents related to the merger filed today, though, we now have a much better idea of where T-Mobile’s TV plans stand, and what they might look like in the future.

First, the bad news: Layer3 isn’t big enough to get good prices from the content companies, so you’re not going to be getting a magically cheap cable bundle any time soon:

The acquisition of Layer3 provided T-Mobile with a foothold in the video distribution marketplace, while positioning the company to leverage its national distribution footprint for expansion of the business going forward. However, further expansion of the business will be limited for T-Mobile on a standalone basis. In particular, Layer3 faces higher costs, especially for licensing content, than its major MVPD rivals because its smaller customer base does not provide the scale needed to leverage volume discounts. Indeed, T-Mobile estimates that Layer3’s content acquisition costs are 20-30 percent higher than its larger rivals for accessing the same programming.

Let’s pretend that T-Mobile wanted to use Layer3’s technology to offer a streaming bundle of 50 popular channels, including the usual mix of sports, news, and entertainment. Hulu, Sling, YouTube TV, AT&T’s DirecTV Now, and Fubo all offer similar bundles for around $40 per month right now, and according to industry sources who have spoken to BGR, they’re barely making money. Assuming that those are the “major MVPD rivals” that T-Mobile is alluding to (which they definitely are), we can conclude that T-Mobile would have to charge around $50 for an identical TV bundle, and given that T-Mobile customers could just go out and buy any of those existing bundles for less money, T-Mobile’s probably not going to do that.

The pricing issue explains why T-Mobile hasn’t made any progress on its TV plans so far. Since it can’t magically make the content significantly cheaper, T-Mobile’s only advantage will be allowing customers to stream TV content without it counting against their data cap — a valuable bargaining chip for sure, but given that most people have home internet already, not a dealmaker.

But there is good news in here, and it relates to the T-Mobile Sprint merger. If the deal is allowed to go through, T-Mobile says that its increased customer base will enable it to offer content at lower prices, and build a better 5G network to deliver higher-quality video:

In the near term, the customer and retail scale created by the transaction will enable New T-Mobile to more rapidly expand the current Layer3 model than possible without the transaction. This scale should allow the company to acquire content at lower rates and on better terms than TMobile and Layer3 can do on their own.

Over the longer term, New T-Mobile’s 5G network will allow the company to offer the nation’s first 5G-delivered in-home and mobile video services. This will include high-quality video content—including HD and 4K—to in-home and mobile locations across the country. The Applicants are confident that New T-Mobile will add significant customers and rapidly grow share in the pay television marketplace in the years following the merger.

In two paragraphs, T-Mobile neatly lays out what its TV service is going to look like. In the short run, it will likely be an over-the-top streaming service that will look exactly like DirecTV Now, Sling, or YouTube TV, probably with a “skinny” option, and some significant discounts for T-Mobile customers.

In the long run, T-Mobile wants to be a full rival to cable in every sense, using fixed 5G to deliver high-quality video into people’s homes without them having to have a wired internet connection. That’s an ambitious plan.

Of course, all of these details come from a document that is supposed to persuade regulators that T-Mobile and Sprint should be allowed to merge, so of course they’re going to paint a rosy picture of life after a merger. But regardless, it’s good to see that T-Mobile hasn’t forgotten about its TV business, and that (fingers crossed) we might see a new cord-cutter streaming plan in the near future.