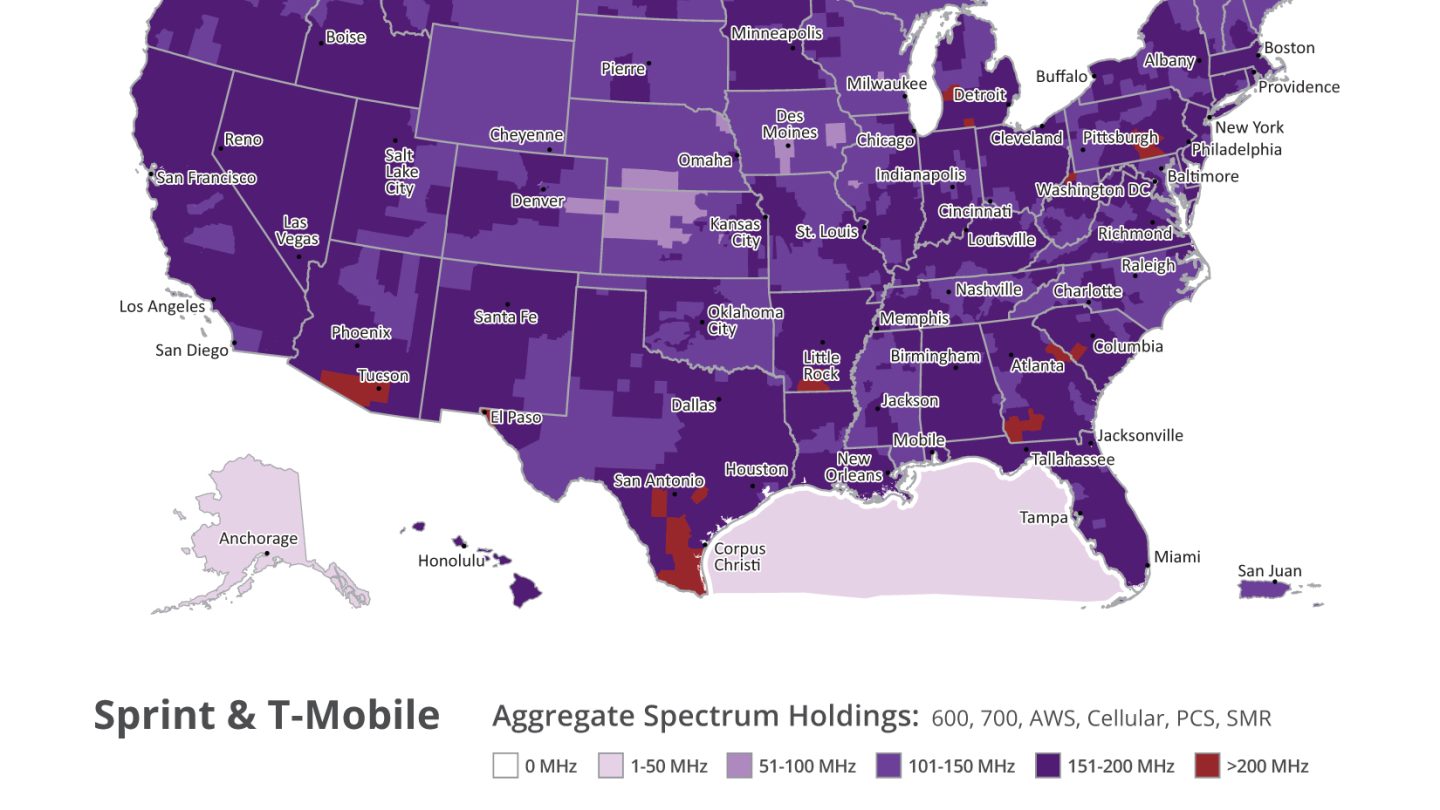 Reports are swirling that T-Mobile and Sprint have agreed a deal to merge in principle, with an announcement set to come in October. A merged company (T-Sprint? S-Mobile? Oath?) would be a formidable player in terms of subscribers, with about as many customers as Verizon or AT&T. But there’s a much bigger question for existing customers: What would the network look like?

Spectrum licenses are the ultimate deciders of how good a network can be. You can throw all the towers and micro-cells at a wireless network that you want, but without enough wireless spectrum to build out, a network will never be good. Verizon’s long-term holdings in low-band spectrum have historically given the company an edge, especially combined with enough money to invest in infrastructure.

Sprint and T-Mobile, on the other hand, have long been limited. Sprint has buckets of high-band spectrum, which is great for short-range communications, but bad for getting enough coverage to make a voice call in rural areas. T-Mobile historically lacked low-band as well, but thanks to its $8 billion investment in 600MHz spectrum this year, its coverage should be getting much better in the near future.

So what would combining those two networks do? John Gilmer, VP of Data Integrity at network intelligence firm Mosaik, said that “a combined network would be very competitive in the future, thanks to nice spectrum holdings.” He said he’d be “very surprised” if Sprint doesn’t have to sell some of its high-band spectrum as a regulatory condition of any merger, but nonetheless, Sprint-T-Mobile would be in good shape spectrum-wise. You can compare the spectrum map of a combined Sprint-T-Mobile at the top of this article with one of Verizon to understand how the two networks would measure up in the long run.

Consumers shouldn’t expect to see many immediate benefits, though. Combining two separate wireless networks is a long and torturous process, especially because T-Mobile and Sprint use different LTE bands, and different 2G networks. (T-Mobile uses GSM and Sprint CDMA.) Gilmer thinks it’s a ballpark of months and years, rather than weeks, until T-Mobile customers will be able to use Sprint’s network and vice-versa.

For the two companies, the benefits of any merger are going to be cost savings and increased revenues to spend on investment, rather than suddenly having a better network.

But for consumers, those cost savings might end up hurting. The wireless industry is currently competitive, thanks to the variety in big wireless players. Verizon and AT&T have the best network, the most subscribers, and the highest prices. Sprint and T-Mobile have to compete on features (like unlimited data) or price. That competition helps keep prices down across the board, and forces AT&T and Verizon to offer unlimited plans — even if it’s bad for the bottom line and the network.