There’s something surprising about the latest Facebook scandal, which very well may be the biggest in a long line of controversial events that have plagued the world’s largest social network. If we’re being honest, it’s not at all surprising that a company full of shady political consultants was able to use Facebook to harvest personal data from millions of unknowing users by disguising its efforts as a personality quiz. After all, Facebook has played fast and loose with user privacy from the very beginning. The company continues to offer new security options and privacy settings — but only each time there is a public outcry, of course — and yet things like this latest kerfuffle have long been the norm for Facebook.

No, the surprise is that Mark Zuckerberg is still missing in action. That’s right, we’re in the midst of what is arguably the biggest and most troubling crisis in Facebook’s history, and the company’s CEO hasn’t said a word. While Facebook’s fearless leader stays silent, let’s take a look at the latest new developments in this story.

Perhaps Zuckerberg has been so quiet these past few days because his eyes are glued to Facebook’s share price, which continues to tank. How bad is it? Here’s a chart: 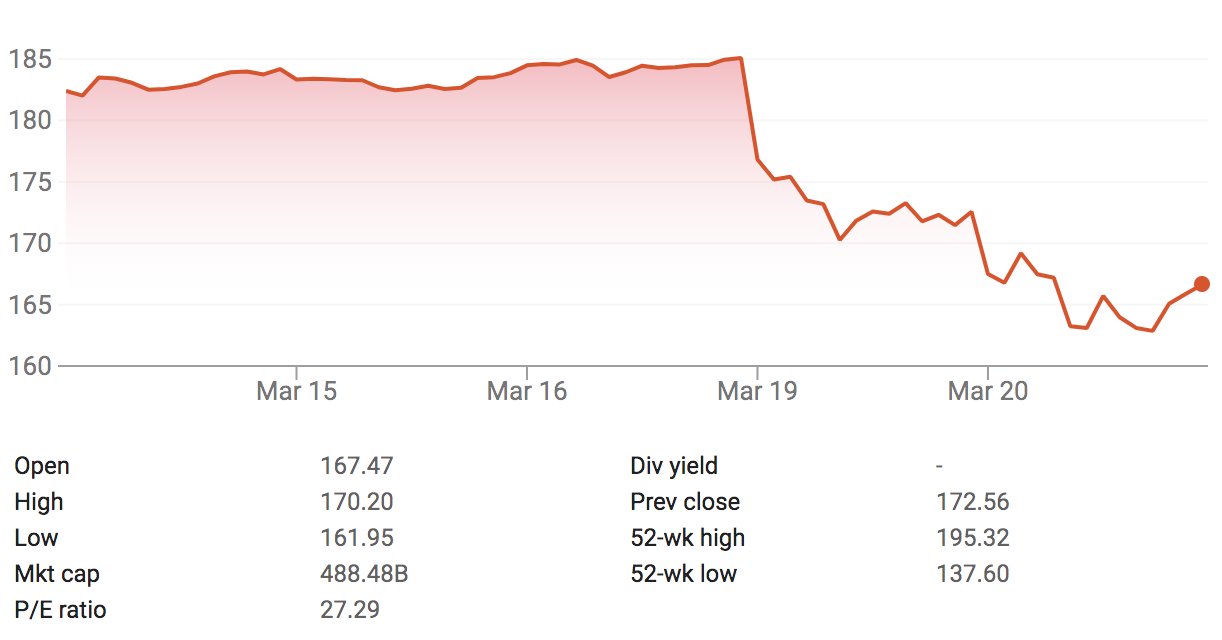 Facebook shares closed just north of $185 at the end of the day on Friday. On Tuesday, the stock closed at $168.15 and continued downward to about $166 in Wednesday morning’s pre-market session. That’s obviously a massive hit, but the severity can be better expressed in terms of market capitalization. On Friday evening, Facebook was worth $537.69 billion dollars. At Tuesday’s close, the company’s market cap had dropped to $488.48 billion. That’s a drop of almost $50 billion in two days of trading.

This scandal will undoubtedly lead to a number of lawsuits in the coming days and weeks, and now the first one is here. Of course, money trumps privacy every time, so the first suit surrounding the Cambridge Analytica scandal comes from a Facebook investor who claims that Facebook harmed investors by making false or misleading statements. By not disclosing the fact that it violated its own privacy policy by allowing Cambridge Analytica to mine user data without consent, Facebook is accused of being responsible for the massive dive its share price is taking.

As a result of defendants’ wrongful acts and omissions, and the precipitous decline in the market value of the company’s common shares, plaintiff and other class members have suffered significant losses and damages,” the lawsuit reads. You’ll find the entire lawsuit embedded below.

View this document on Scribd

People around the world are using the #DeleteFacebook hashtag in an effort to get others to delete their accounts. After all, Facebook allegedly knew about Cambridge Analytica’s shady data-mining efforts for two years and did nothing to stop it.

So, who is the latest person to join the #DeleteFacebook grassroots movement? Why, it’s none other than Brian Acton, cofounder of the company WhatsApp, which Facebook acquired for $19 billion. That’s right… Facebook made Acton a billionaire and now he’s telling people to stop using the service entirely.

Mozilla’s share of the browser market continues to decline, so the company has been known to jump on hot issues, in part to raise awareness of its own products. Of course, that doesn’t make the issues at hand any less important. Mozilla has started a petition demanding that Facebook make adjustments to app permissions in order to make it more difficult for third parties to mine user data. Here’s the text from the petition:

Up to 50 million Facebook users had their information used by Cambridge Analytica, a private company, without their knowledge or consent. That’s not okay.

This wasn’t a data breach, no one hacked into Facebook or stole passwords. It happened because Facebook allowed apps to access not just sensitive information of people who used those programs – but their friends as well.

Facebook said it’s taken steps to “limit developer access to detailed friend data”, but Facebook’s current default settings leave a lot of questions and a lot of data flying around. One thing is clear though: Facebook needs to step up and respect its users.

Will you add your name to the petition asking Facebook to change its app permissions and ensure your privacy is protected by default?

This entire scandal came to light because a former Cambridge Analytica employee blew the whistle, making the company’s shady practices known to the world. Now, Chris Wylie has spoken out again in response to the huge blow to Facebook’s stock. Some have suggested that sinking Facebook shares may have been part of Wylie’s motivation, but he says he’s not on a crusade against Facebook and didn’t even consider that blowing the whistle on Cambridge Analytica might impact Facebook shares.

Wylie sat down with Peter Jukes in front of an audience of journalists at the Frontline Club in London, where Jukes asked him what his thoughts were on Facebook losing about $50 billion in market cap. “That was not my intention, and, I’ll put it this way: I think that it is Facebook’s behaviour that has caused that knock in share price, I don’t think it’s me,” Wylie said.

He continued, “The frustrating thing for me is this story has really spiralled into Facebook’s bizarre reaction to it rather than what the original story was meant to be about. And that’s not necessarily an entirely bad thing. I think Facebook deserves a certain level of scrutiny, but that wasn’t what I set out to do. I’m not on a crusade against Facebook.”